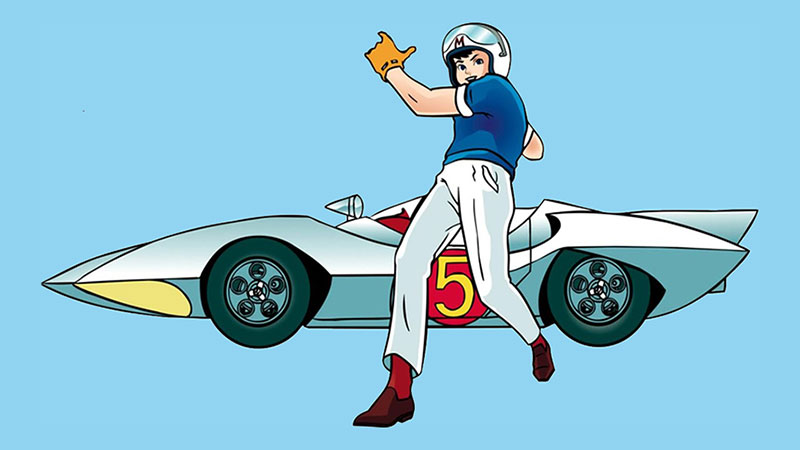 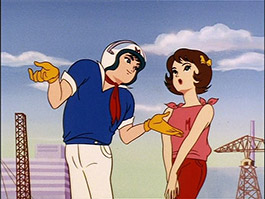 Auto racing… I love the sport. Always have, always will. Mix that love of dancing on a knife’s edge with four wheels with animation and I am one happy otaku. Speed Racer was already an established classic by the time I was first exposed to the property in the mid-1990s when it made its way to MTV and more importantly in my case, home video. My diet of Robotech and Voltron with Indycar and F1 now had a killer combination in a couple tapes I rented from the local video store. What I did not realize at the time was I was viewing a cartoon that has touched many a generation and in many ways connected me to others whose only connection to anime was this singular show. Thus is the power of Speed Racer.

1967 was a great year for motor racing. Parnelli Jones nearly won the Indy 500 with a jet turbine powered car, Dan Gurney and AJ Foyt won the 24 Hours of LeMans in a Ford GT40 (and thus was born the first champaign spray, thanks Dan!) and Team Lotus debuted the iconic Lotus 49, which featured the classic Ford Cosworth DFV engine in F1 competition. Also of note from F1 was Honda’s second victory in the hands of John Surtees at the Italian Grand Prix. But another, perhaps more subdued, victory for Japan would be the television debut of Tatsunoko’s Mach Go Go Go (well, ultimate victory for us cartoon lovers). Tatsuo Yoshida’s manga had come to life… guess it helps the fact that he is head of Tatsunoko Studios (don’t you love that seahorse logo?). Thats all fine and great, but when Mach Go Go Go’s translated/adapted version came to the west as Speed Racer in the fall of 1967, the real race truly began.

Consisting of time and true shonen standards of fun, action, adventure and friends, Speed Racer combined it all around a young man trying to become a top race car driver with one of the coolest cars ever, the Mach 5. Is it me or does the Mach 5 look like a late 1950s Ferrari Testarossa mixed with period James Bond gadgetry? Speed with his family (including everyone’s favorites Spritle and Chim-Chim?), girlfriend and friend/mechanic travel all over the globe proving his skills and many times getting into side adventures as well. Often times Speed meets up with the mysterious Racer X who is so much like an older brother to him… oh yeah, right… he is is older brother, just in disguise. Hope that doesn’t spoil the party for some of you, but it is one of those in show details you pick up on quite fast.

My greatest joy with Speed Racer is the fact that this is a series in which I can connect with people who are usually older than me. Many fans of this show may or may not be fans of Japanese animation per se, but their love and fondness for the adventures of Speed and crew cannot be denied. If you grew up in the 1960s or 1970s, Speed Racer was a keystone in your upbringing and to see fans still connected with this show makes me feel a little less alone in the world. Great examples of Speed Racer references include an experience from work in which I was asked about the artwork in my cube, “Are you the one with all those Speed Racer type images in your cube?” Also conversations with my dentist during appointments about animation in general. Even though he is not up to par with most anime, he did grow up with Speed Racer and still loves it. In fact both of us had to instruct the hygienist on how cool this show is. The magic of synchronicity through Speed Racer… puts a smile on my face. 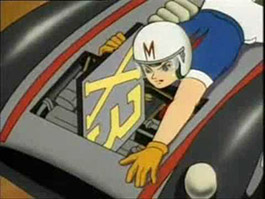 This is a show that shows its age with the jerky movements, simplified shapes and that machine gun dub that makes me say they don’t make anime like they used to. I appreciate the archaic nature of Speed Racer, both in terms or visual and acting (thank you Peter Fernandez for giving us an English version). Sadly though, I don’t follow professional racing anymore due to lack of interest. And yet I have vintage races to see, AND… I still have Speed Racer amongst other car and racing related anime (Initial D as an example). All is good! …Go Speed Racer, Go Speed Racer Go!