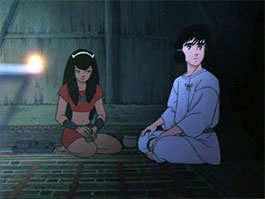 We continue our journey through the Phoenix trilogy from the 1980s with the second part, an adaptation of the Yamato Chapter. Debuting as a followup to the previous year’s film Karma Chapter, 1987 would bring the Yamato Chapter as a direct to home video OVA release. The issues of karma, fate and destiny would be told once again in another historic era from Japan’s history. And riding along side for the ride to make sure that order and fate are in good hands is that beautiful bird of fire herself, that avian goddess, the hi no tori, the firebird, the phoenix. 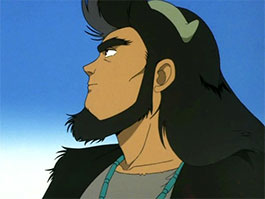 From some quick guerilla research, the Yamato Chapter is loosely based (very loosely) on the famous traditional legend of Yamato Takeru, a name not known very well to us in the west. From time to time and from watching various anime, we may come across and hear this very name… Yamato Takeru No Mikoto… Oh lord not Garzey’s Wing. Yet beyond the experiences we have may hearing this name from oddly dubbed projects we come to learn about the Arthurian qualities of this mythological tale and figure and it’s importance to Japan. … reason #1 to watch anime: you subtly learn more about Japanese culture!… How ironic that historically both king Arthur and Yamato Takeru are from very similar eras in time and even though a great distance existed between both heroes in terms of worldly distance, they arrived concurrently in time. Could this be the work of our friend the phoenix? Hmm… Onward now and back to the Yamato Chapter…

Tezuka’s reimagined version begins with a pastoral scene featuring a traveling youth, Oguna. While walking along one day he gets shot in the arm by the bow of a beautiful young maiden, Kajika. Too bad this was not cupid’s arrow instead, because from the beginning these two had sparks in their eyes; love at first sight defined. This developing relationship will become the cornerstone, the pillar, the axis, from which the entire story centers itself. Star crossed lovers who share a common destiny. While treating Oguna’s wound, Kajika would introduce her brother, Takeru, leading to a moment of hesitation in the eyes of Oguna. This is a familiar name, but why? Soon Oguna begins to enjoy his stay with the rustic Kumaso tribe and begins to have strong feelings about wanting to join their ranks and marry Kajika. Except there is something that is biting at him. Oguna is actually part of the rival Yamato clan and he has a particular vendetta towards Takeru.

A tale of love vs. duty, fate vs. freewill and justice vs. mercy, the Yamato Chapter can be likened to a drama where at the beginning we begin in ignorance and slowly as the plot progresses we move into clarity and truth. Each layer slowly reveals itself to twist the plot in a slightly different direction that finally concludes with a slow tragic tale of love, sacrifice and redemption. The Yamato Chapter becomes at the end of the movie a romance that shows the power of humanity, compassion and trust. The legacy that Oguna and Kajika share together at the end shakes the established order and calls for change, yet it must come in the face of martyrdom; such was their fates. Never think one small step, or sacrifice, towards progress and bringing clarity to all of us is too small as we all have our parts to play in this game of life. Only the phoenix knows what and when our roles have been fulfilled, so keep giving it your best attempt.

Adapting Osamu Tezuka’s original manga was again Madhouse. A double combination of high quality presenting a rare gem of mature genius. As I have said before in regards to any of Tezuka’s Phoenix adaptations, I view these anime productions as one of my sources for spiritual pondering. How many times do we turn to a religion, or spiritual philosophy to find answers to the complexities of life? I know I have and still do yet there is ironically an alternate source via Japanese animation from the pen of anime’s ultimate grandfather. To Osamu Tezuka… I greatly thank you for sharing these stories with us and I hope I can be one source of I don’t know how many to continue your legacy. Peace be with you my friend.