I love the dark! It’s not scary at all. Many consider it like a tomb, the idea of death and nothingness. I say perhaps consider the dark more akin to the womb as a place of safety, that is also undefinable. Many times there are things that go bump in the night, or the dark, and they are not so much there to scare you, but instead to cast aside all those oddities (shinma) that bring out panic and fright and return them to where they belong. I know of one such entity, a girl who is destined to aid mankind from all the shinma and evils of the world. Yet she also is of the shinma as she is herself a vampire, care to be kissed? Her name is Miyu, better known as Vampire Princess Miyu. 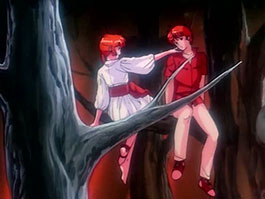 More often then not, much of the original OVA market seemed to have a heavier emphasis towards a masculine audience, in particular for those of us who were around in the VHS days of the 1990s in the west. Too much one sided marketing… I am glad times have changed. Shojo OVAs did of course exist and many found there way over early on, you just didn’t know it at the time. Vampire Princess Miyu presents much with action and gothic horror elements and has direction and character designs from one Toshihiro Hirano (I love his designs!). That alone could sell the show to a particular audience, but it is balanced with beautiful characters, relationship dynamics and inner psychological struggles. And lots of dark!

I often think off Vampire Hunter D, or even early CLAMP titles like Tokyo Babylon and X (which are kind of the same story?) when I reflect on Vampire Princess Miyu. Much of shojo, but not always, has a certain color pop and often gets stereotypically pastel shades to the maximum. Vampire Princess Miyu is darker, more subdued with an emphasis on maybe one particular color… RED! While this may break the usual gender enforced stereotypes, going dark actually brings an anime like Vampire Princess Miyu into the realm of the divine feminine; the yin of yin and yang. The black, the infinite, intuitive, nocturnal, the total unknown and most importantly the source of everything that is actually nothing. Miyu can be likened to the dark goddess archetype. 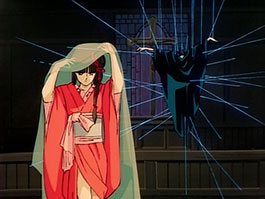 Miyu is also a bit of an outcast who has to hunt her own kind. This is the parallel I draw to Vampire Hunter D. Her only friend is her servant, Larva (though sometimes I hear Lover? I have goofy ears) who is be-masked and is much like a dark guardian angel. This leaves Miyu basically alone in her mission to fight the shinma, as well as in her overall life, which leaves no room for love or connection. The only so-called connection she can give to humanity is to grant them an eternal gift in exchange for the human blood she needs to sustain her existence. And she is picky as she is not here to ravage everyone’s necks. If she thinks your attractive and suffering, you are more than likely on her hit list. Over the course of the four episode run we are also joined by Himiko, a spiritualist, who is after Miyu to try to stop her from biting her victims. She soon realizes that her destiny is tied to Miyu from the past and comes to have compassion for the princess vampire.

The year was 1988, and while big and exciting mecha OVAs in the name of Gunbuster and Patlabor were all the flash and dazzle and had awesome production value, they lacked something essential… the dark. Sometimes you need the dark to find out who you really are. Hence why many of us have an affinity towards… the dark. Vampire Princess Miyu presents the dark with horror and monster elements in an extremely tasteful way, which by the end of the episode run becomes a fine character study of both Miyu and even Himiko. That being said I do love Gunbuster and Patlabor for all that they embody, but I also enjoy Vampire Princess Miyu. Why? Oh come now you know why… I love the DARK!