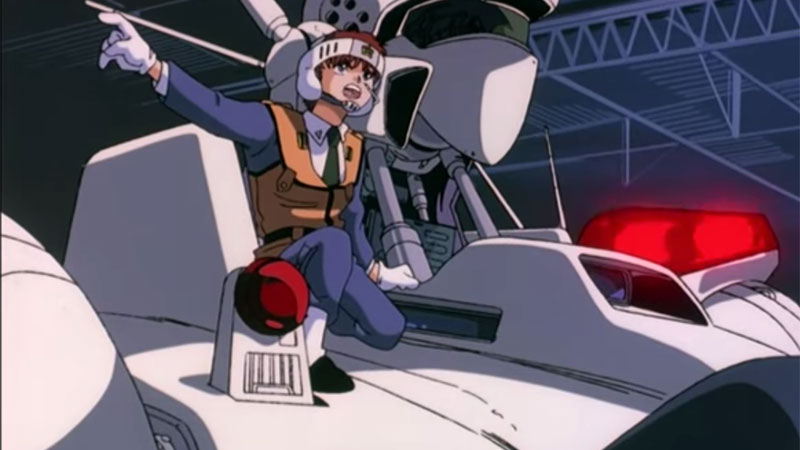 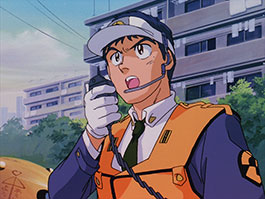 PATLABOR! Veni Vidi Vici… and then… retirement. Yes there have been reboots of more recent for Patlabor, but in essence like Space Battleship Yamato, or even the Beatles… well maybe the Stone Roses as we are talking the late 1980s here, Patlabor would have it’s time in the sun with the original ‘band line-up‘ in tact for only a minute period of time. A manga, TV series, two films (I am not going to count WXIII as a third) and a follow-up OVA would be born from a little seven episode OVA created by a partnership in 1988. What happens when super talented folks in the anime industry unite for a project? They make a classic. … now then, can we get the old band back together?

One of the greatest mecha shows that is also a comedy, a drama, a showcase for parody and a cop show all rolled into one nice neat seven episode package. Very tidy and an example of bringing together talented minds to make something original and special. The main creative group behind Patlabor, known as Headgear, consisted of manga artist Masami Yuki, mechanical designer Yutaka Izubuchi, writer Kazunori Itō, character designer Akemi Takada and director Mamoru Oshii. I leave it to you to look up their resumes. The direct to video OVA had proven itself as an affective medium to distribute anime for almost half a decade and the diversity of projects showcased that this was a free for all medium. When Patlabor was released in 1988, it was positioned at a good place and time. Independent and smaller focused projects were abundant and ranged from well done productions to experimental eccentricities to the laughably bad. Yet as fans we love them all! 1988 would kick up the notch with several releases that elevated the OVA into a format that became a viable art form including Patlabor, Gunbuster and the behemoth Legend of the Galactic Heroes.

Patlabor as a mecha show speaks to those who were fans of giant robot animation as children and still are even as adults… myself included. Watch the opening credits and feel all that enthusiasm from both past and present collide… “nothing’s impossible.” The aspect of going to work and fulfilling a role in society is something many of us understand well and is a main contributor to the storyline of Patlabor. The cast of Special Vehicles Section 2 are not super heroes, nor space pilots, they are your average everyday police officers… who pilot, or work with mechs while solving a case. The whole concept of mecha in Patlabor is perhaps the most extreme portrayal of giant robots as standard everyday equipment. a real “Real Robot”… no pun intended. Yet the mascot like patrol labors, the Ingrams, are not the be all end all of this show.

The true stars are the cast and what a mixed bag indeed: an aloof, but genius captain; an enthusiastic tomboy who names her Ingram after her dog; a cynical rich kid; a gun crazed lunatic; a nerdy husband, a gentile giant and an American transfer round out the crew of SV2. The dynamics between each personality is what fuels Patlabor. The episodes are a mixed bag of ideas, some of which come out of left field. You get your introductory episode, a bomb defusing episode, a Godzilla inspired episode, a summer camp murder mystery episode and even a two parter that vaguely reminds me of a prototype for the future film Patlabor 2: The Movie. References galore pop up time and again, but in clever and funny ways that makes the comedy of Patlabor pure gold. One example that left me laughing… “What do you think your piloting? Great Mazinger? Dangaioh?”

Who would have thought that this little project would grow into a massive success? And the beauty of it all is that as Patlabor grew it seemed to have gotten better… perhaps because we get hungry for more adventure of the SV2. Traditional mecha anime, piloted robots, by this time had waned in popularity on TV in terms of younger fans except for a few exceptions. All of us seasoned fans, perhaps a little bent on nostalgia, welcomed the initial Patlabor OVA that filled a need to those of us who may have grown and taken on additional roles into society, but are at heart are still enthusiastic fans of animation. We all may have jobs now, even our heroes, but were still at the root of it all the same. Now, time to go to work!