“Fun and excitement are abundant today as the Pole Position team get their own entry at The Classic Anime Museum.” … now that’s how to start an episode. 😉 It feels like Saturday morning though it may only be Tuesday Afternoon… I’m looking at myself, reflections of my mind… nice Moody Blues tie in, hehe. Pole Position was for me a staple reason to get up early, grab a bowl of Cheerios, or Rice Chex and cuddle up with my favorite toys for a couple years. Based on the classic arcade game by Namco, Pole Position was and still is one of my favorite shows from my formative years. Time to buckle up again for another ride.

Often when it comes to video game adaptations into animation you have one of two choices: be a literal copycat or completely jump the shark and turn the show into something completely unique. Pole Position easily took the later option. Seriously, how does one turn an arcade quarter muncher driving laps around Fuji Speedway? An episode can turn into a quick game over if you hit any of the objects on the track, or the other cars… instant EXPLOSION! We need to do some heavy modification here work, à la Jayce and the Wheeled Warriors as an example. DiC created both of these shows and knew how to take creative liberties to the extreme to create a cartoon. And in either case, it works… splendidly! 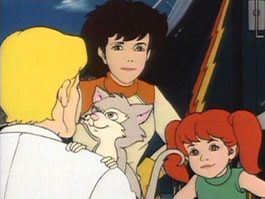 Now… let’s start off this alternate version with a brother and sister stunt team who are accompanied by their even younger sister and their pet. Is it a crossbreed between a monkey and a cat, or something else altogether? Who cares, it’s Kuma and I want one and I like him. Or, it is her? Maybe their non-binary? Very forward thinking! Now for the secret… Dan and Tess Darrett are more than just your everyday stunt drivers. Like their parent were, they are secrets agents for the organization Pole Position and solve crime and mysteries. Only their boss, their uncle, knows. And instead of the fancy open wheeled Formula One racer, let’s give Tess a red vintage Ford Mustang and Dan some blue futuristic prototype each with a computer A.I. that communicates with them, Wheels and Roadie. Brilliant, brilliant, I think we have a winning entry here.

Pole Position is a stew where we take the name of a popular arcade racer, mix in elements of Scooby Doo, Knight Rider and James Bond and end up with a 1980s version of Speed Racer. And since the show was only 13 episodes, it doesn’t grow stale. It’s almost perfect for what Saturday morning cartoons used to be. Had it been a longer run for syndication, 65 episodes, then Pole Position may end up running out of steam? Maybe? Can’t say, because like everything, Pole Position is what it is and I love it for what it is. Action and adventure, cars, futuristic technology for the mid 1980s and being animated in Japan… I call that a killer combination. Check the credits at the end and mashed between the American and French staff you discover all the animators were Japanese. Even famed mechanical designer Shinji Aramaki contributed work. Oh yeah almost forgot… this is a DiC show… you have to have a classic Shuky Levi soundtrack and theme song. Yeah… now were ready to race! … um, who has the keys?

Honestly, a Saturday morning can be any, or every new morning of your life. Perhaps even a Saturday morning can occur during the afternoon or evening? Adjust accordingly to your local timezone. We all have a reason to get up every morning to see a new day… at least I hope so. For a time there was fun entertainment before the crack of dawn, but nowadays you may hit the snooze button twice before realizing it is past noon. In the end it does not matter when you get up, or what you define as the morning as you can always watch a Saturday morning favorite, like Pole Position, either via physical media or somewhere online at anytime. How the world has changed; as a kid I would have never saw that coming.