The ultimate magical girl showdown of the 1980s. A crossover that much like lightning in a bottom, flashes and then disappears. In the span of three short minutes all will be decided as who should be crowned the ultimate 1980s magical girl. In the left corner, debuting in 1982 and representing Ashi Production we have Minky Momo! (CHEERS!) And in the right corner, debuting in 1983 and representing Studio Pierrot we have Creamy Mami! (CHEERS!) Ladies, gentlemen, undecided, non-binaries and every other designation of beautiful people I present to you Minky Momo vs. Creamy Mami! Alright now let’s keep it clean girls… no hitting below the belt… GO!

The year was 1985 and the fairly new direct to video format of the OVA was in full swing. Several new properties would be introduced on this format, but there was another side to creating anime for this market. Previously created properties, in particular television series that had successful, or moderately successful runs, would get new breathes of life from this format. For the two iconic early 80s magical girl shows Fairy Princess Minky Momo and Magical Angel Creamy Mami, this would be the case. Two all new, almost feature length productions, would debut. For Minky Momo there was La Ronde in my Dream and for Creamy Mami there was Long Goodbye.

Occasionally OVAs would have a theatrical screening, which more than likely, was to promote the videos themselves. Plus! You can see these video on the big screen… WOW! I And this is where Minky Momo vs. Creamy Mami comes into the scene. From my research, these two videos were shown as a double header and this short video was like a teaser, a welcome, a short introduction. There is not much to review, or describe, as the two girls meet, shake hands and then… fight it out in an over the top style that recalls much to say Project A-Ko. It’s fun, quick, cute and easy to find on Youtube. What more can you ask for? Chocolate cake maybe?

So the question becomes who wins the match… Minky Momo, or Creamy Mami? I say neither as it all ends in a draw. The real winners are those of us who watch and cheer and get all obsessed over these awesome cartoons. Minky Momo vs. Creamy Mami is what being a fan of anime is all about! 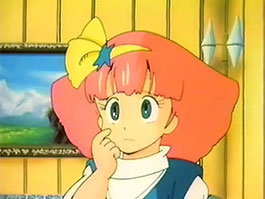 Fairy Princess Minky Momo, the TV series, is one of those backlog shows that I have been wanting to see for quite a while. Alas, I have only come across the first episode with English subtitles up to the writing of this review, but the follow up OVA of 1985, La Ronda in My Dream, is easier to obtain. So I suppose I will start my foray into Minky Mono-land with this production. This reminds me in a way to GoShogun, a mecha series from 1981, where my only exposure has been to the Goshogun: The Movie (a recap) and GoShogun: The Time Etranger (one of my all time favorite anime). And the irony, in two points, both shows are from the studio Ashi Production and the main female protagonists (Minky Momo and Remy Shimada in Goshogun) are voiced by Mami Koyama (again a favorite). Could be coincidence, but maybe not? 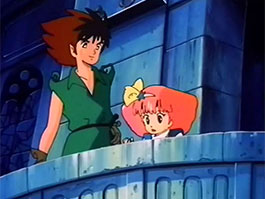 The story begins by giving an overall plot overview, which then cuts into a concert that Minky’s parents are attending. She of course is backstage helping perhaps one of the performers, or even a patron’s pet cat (Minky Momo and family have a pet shop and vet clinic). The promoter soon rushes in to announce that the main star of the show will not be appearing and Minky Momo has an idea and tells him she knows somebody. Now since this is a magical girl show, it’s time to reveal Minky Momo’s transformational powers. She can turn from her usual 10 year old self (I am guessing her age) into a variety of heroic versions of herself (kind of like Cutie Honey), but at about the age of say 18-19. So the star of tonight’s show will be none other than Minky Momo herself, though no one really knows her secret (well except her three animal friends). And much like the magical girls of Studio Pierrot, Minky Momo is now a musical idol, if only for this song.

The musical number was a hit and now comes the drawing for a couple’s vacation to the South Pole. How romantic, more like ironic (too cold for romance, but then again you can be close to each other for warmth?). And low and behold, Minky Momo’s parents win! What a surprise, so it’s time to pack up because our magical girl is going to have the house to herself. PARTY!!! But wait… when all seems to be going good, except you burnt your breakfast Momo, the TV announces that the plane with Momo’s parent had crashed over an island that has been having some weird issues as of late. In no time, Momo and her animal crew get into the Gourmet Pop (car and trailer combo that can FLY!) and head out to find what has happened. So begins the fun! Just be ready to meet an island of children and their leader… Peter Pan! And no Captain Hook or Tinkerbell, fyi.

Interesting is that this OVA was brought over to the west eons ago from Harmony Gold (yes they did more than Robotech) and known as Gigi and the Fountain of Youth. It’s a solid adaptation, but in terms of the 80s I am sure Gigi would have gotten lost to bigger names like Care Bears, My Little Pony, or Rainbow Brite on this end of the world. I never heard of this version until recently, but I am sure some of you out there may have had this on VHS. And speaking of Rainbow Brite, Minky Momo reminds me of the star sprinkle carrying cherub faced creation of the Hallmark Company. Both girls try to spread joy and happiness and use magic and though they are a little different, they are both welcome to help me on a tough day. The 80s, bright colors and magical girls… I miss my early youth.

I want a slice of fun with an accent on the cute; I get my cake and I eat it too! Minky Momo, girl, you need more presence, more love, more in general. After all, you brought the magical girl genre into the 1980s and along with the likes of Creamy Mami, evolved it into a more modern context well before the behemoth of Sailor Moon. Ms. Momo, you will always have my deepest respect and La Ronde in my Dream is an honorable and solid title needed for any collection.