A dark cloud hovers over Tokyo cutting off power, while the population disappears. Five young men clad in modernized samurai armor, one bringing a giant white tiger, join forces with a teenage girl and a young boy to confront this dark shadow. Oh yes, I forgot to mention there is a traveling monk who wields a staff and is in many ways like a guardian angel to the four boys who seems to show up at just the right time. Together they learn to work together and embody the virtues they stand for: grace, justice, righteousness, trust and wisdom. Welcome to Legendary Armor Samurai Troopers. 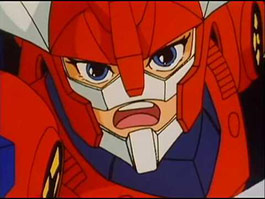 At first I wanted to dismiss Samurai Troopers as a bland Saint Seiya clone, but that was before even trying this delicacy of a show. Samurai Troopers is kind of weird though. I can’t call it a straight forward fighting anime in the style of Shonen Jump. I often equate influences of live action sentai shows, or perhaps Gatchaman and Akira Kurosawa’s Seven Samurai where our five heroes come into town ready to go like in any proper samurai, or western film. There is no real aspect of extended training, or a plethora of story arcs that equate an episode count to well over 100, 200, or more. I also get a mecha vibe as well, since the armors are almost mechanical in nature. Plus the armors combine and this was a product of Sunrise, a studio known for many great mech shows including that little franchise known as Gundam. The transformation sequences make me think of henshin heroes, or even magical girls. The stock sequence of the boys transforming is enough to make any proper magical girl shout out… “hey why can’t we get one that fancy?!” Samurai Troopers just is what it is, an amalgam and a great action show in general.

As an action show characterization is in the passenger seat to the fun and fighting. The five youths that are the Samurai Troopers are very cliche in a typical sentai squad kind of way with main hero Ryo taking a majority of the screen time. Seiji, Shin, Sho and Toma have minor arcs of an episode or two, but I wish they could have had more presence. Their main adversaries the Dark Warlords are a quartet of typical badies who are quite sour in temperament… except one. Shiten from the beginning showed to be the outsider, a man of some moral character that eventually sees the light for his past actions. Shiten’s place at the end of the first arc and in the entirety of the second was a welcome surprise and solidified him as a personal favorite for me. In the end Samurai Troopers is all about saving the day, but looking ever so fashionable samurai armor… with ever greater transformation sequences.

Like many shows one can liken it to a ride at an amusement park. The most ideal would be to start at ground level and progressively move up to the finality. Very few anime ever follow this pattern and Samurai Troopers much like a roller coaster starts off building up, waning a little in the middle and then builds ups even more towards the end. Samurai Troopers follows two story arcs in the 39 episode run, though they end up tying together as one. The first arc felt as if it ended quite abruptly and then at the start of the second, at least for me, it took a little effort to get going. Yet after a handful of episodes the story came back to attention. Think of a director in a film calling cut and rethinking what has happened and saying, “hey we could have done this better!” So begins phase two and the true promise of the story of Samurai Troopers would bear fruit.

Many in the west came to know an alternate release, Ronin Warriors, which besides some name changes and some “totally” 90s slang is very faithful to the original. Impressive, plus the cast was familiar as it was accomplished via the Canadian Ocean Group, a very familiar cast who dubbed many shows in the 90s. Short and sweet, simple and straight forward, adventurous fun with action, this is what Samurai Troopers is all about. I also want to give a quick thanks to Ashley Capes from The Review Heap for requesting Samurai Troopers. Visit his site for other great reviews as well!