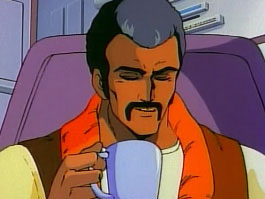 COFFEE!!! Double expresso latte with caramel and whipped creme… Ok, maybe decaf. Wait a minute, I don’t like coffee. And to be honest, I just spoiled the Humanoid. If you have seen in you know what I mean. You think it’s some goofy space adventure rip off with elements of Star Wars and the robot from Metropolis (well a more pretty version?). No it’s just coffee, probably got backing from Starbucks most likely. You know I’m done. See ya.

Oh you are still here? Yes there is a lot of coffee mentions in the short one off OVA, but in reality it is in my honest opinion the most 80s-tastic greatest bad anime ever. So it is in reality not that bad, just unbelievably entertaining. If this is not in your collection, look for the loose change in the couch, or borrow from a friend. And yes, you could download via torrent, but you are different, eh?

Well what to say without ruining this one, its a short production? Well there is the… no can’t say that. Or how about… no can’t say that one either. OH POOH!!! Our story begins with a rip off of Lando Calrissian, Alan making a big remark about how “memories of Earth and the rich smell of this coffee keeps my spirits up.” (Yes that is a direct quote) Wait, wait a minute here… Coffee… already. See told you so. 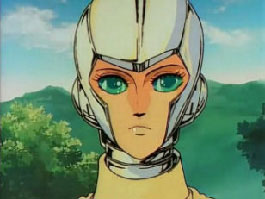 OK, now to be serious. Despite The Humanoid being ridiculous beyond measure, cliche as all out, I have to say one thing about. I LOVE IT. It’s a goofy mess and a half, but as I said earlier, it has an entertaining value that only cheesy low budget sci-fi can only do right. Here is the basic plot. Two guys travel to a far off planet to make a stop to meet up with one of the boy’s girlfriend’s (and that would be the yet to be named Eric, because we find out later Alan is married, sorry ladies) and her grandfather who is a scientist. And guess what grandpa Dr. Watson invents, this really sleek and sexy ultra feminine robot named Antoniette who eventually learns about love and such even though she is only a machine? But, you also have a plot where you have some princess held in exile from another planet. And her administrator is a megalomaniac bishonen, Governor Proud is his name and that is no lie, who tries to reactivate some old ship which could destroy everything. WHAT? All of this in about 45 minutes? Yeah and our heroine Antoinette saves the day, but at a price. Plus, even more COFFEE references.

Now I will give The Humanoid some credit, it is the only show I have seen where people have to escape from an escape capsule. That is a first for me? I mean this is what cheesy one-off OVAs from the 80s are all about. Highly creative, ridiculous and when done right… fun. It’s not that massively over testosterone gore of M.D. Geist, the what-the-hell did I just watch Crystal Triangle, or the Dirty Pair rip-off of Wanna-Be’s. (whoa two of these three were released by Central Park Media too, love ya CPM) It’s The Humanoid. Slightly flawed, yet beautiful in the eyes of those who have a taste for ‘bad’ anime. No not ‘bad’, more like ‘totally awesome’.

And I forgot to mention that my beloved Kaname Production was the studio that made this one. I am really sorry everyone. So now watch or rematch this mess because after all, it is good for you be it mind, body and soul. As for me. I will just Dance, Dance in the Rain… If you like the opening credits song you will get that one.

The great thing about doing panels about years of the 1980s is that I end up finding out that I have barely scratched the surface in regards to classic anime. For 2017, I am working on a panel for 1982 which features classics like Space Adventure Cobra, Arcadia of my Youth, and the original Macross (yeah for Macross). And in the process I find undiscovered gems, at least for me, like Tokimeki Tonight (Heart Throbbing Tonight), which I just finished recently finished and enjoyed very much. So what is this shojo comedy all about?

Ranze Eto is much like your typical teenage girl. She is totally into the boy she sits next to in class, Shun Makable (she always calls him Makable-kun, I thought it was cute), and she has to deal with a rival, the ‘thick eyebrowed’ and conniving Yoko Kamiya. But there is more than meets the eye because Ranze comes from a family of monsters. I mean she does not look like a monster, but ask her parents who are a vampire (her father) and a werewolf (her  mother). And when these two fight, wow, they go way off the wall, but they do love each other and their family. And plain looking Ranze, in time, discovers she has a vampire-like ability where if she bites anything or anyone she transforms into the victim. And don’t worry, no harm is done to any humans or animals as they end up passing out for a while. To transform back, she has to sneeze… pepper please! 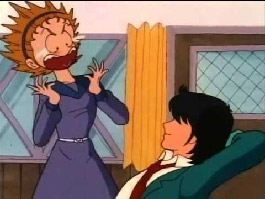 Similar in a way to the Shonen Jump classic Kimagure Orange Road, as this has a prototypical  love triangle of one boy being fought over by two young ladies (the simple days before harem) and super natural elements, this one is a bit different. First of course it being a shojo, the ‘target audience’ leans the story telling a little different, but the big difference is the elements of horror and mythology. And it works quite well with all these odd elements, but that is just the surface. The real essence is the comedy. And I will give my two cents, I had moments where I was laughing a lot, A LOT! Going in cold on this one, I was surprised with the all out lunacy. Such a funny show. Although I felt after watching episode 26 it got a bit heavy with filler episodes. Episode 26 was such a great climax, but maybe that could be due to popularity extending the series, maybe (it ended after 34 episodes in case you are wondering)? Just my hypothesis. Funny thing this show ended well before the end of the manga, yeah never heard that before.

And then there are the opening and closing tracks, especially the closer (named Super Love Lotion… kinda kinky?) as it makes you want to dance with that electronic disco beat. Also an interesting observation from me as this show was animated in 1982 because the background artwork reminds me a lot of titles from the early 1970s like the original Lupin III. A little bit on the plain side, but then again this was animated by Group TAC (from my research as they seemed to be the main studio?) and they are also known for their 1985 classics Touch and Night on the Galactic Railroad both of which are a little sparse in the art department, but masterpieces due to the story telling.

Tokimeki Tonight you were a pleasant surprise indeed. I can never give up the faith that there is more gold left in the ground to harvest. Now the only question is… what should I watch next? 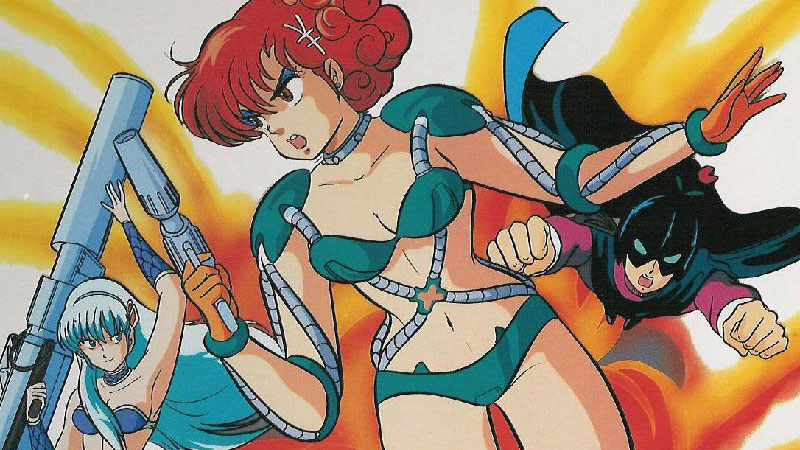 Can’t a girl get a break? FOR REAL. Case study: Maris known as the Chojo, or the Supergal, is known to have “some” issues. She is short tempered, always broke, her parents are complete airheads and always asking for money, she has to work during her vacations, her boss is strict and she has to wear these odd braces around her body because she possesses super strength. Hence being the “Super Girl.” That… and the planet she was born on was blown up in front of her eyes as a child. Maris, Maris, Maris… don’t fret. I love you and you have many fans as well (stand up folks). Maybe your next assignment will have you saving some attractive guy who is the heir to a powerful family, maybe? It’s either that or go back to the world of women’s professional wrestling where you had that nasty rival, Zombie Sue. Such is the life of working for the Galactic Patrol’s Special Police. Much like the ending of the Malcolm in the Middle… “Life isn’t fair.” 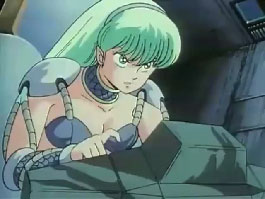 As a creation of Rumiko Takahashi, Maris the Chojo is much like a lot of her other work… a goofy, crazy, fun time. And it was Maris the Chojo (and Mermaid Forest as well) that got me onto the “Rumik train.” Many of her works, particularly the really popular titles including Ranma 1/2, Inuyasha and bonus points for you Urusei Yatsura fans out there, are very lengthy. Hundreds of episodes is a bit to take in and sometimes for certain properties or creators you need a smaller dosage. Luckily Maris the Chojo is a smaller property, just a one-off OVA part of the Rumik World series which featured other classics such as Fire Tripper, Laughing Target and the previously mentioned Mermaid Forest. And in my experience with Takahashi’s work, I love these shorter stories as they are for me more focused. Like many longer series, and this is not exclusive to any particular genre or creator, they are kept alive because of their popularity and in some ways it begins to wane or grow tired over time. Keep it short and sweet and with a solid ending.

The beauty of Maris: The Chojo is it is a wonderful example of the early adoption of the direct-to-video format, the awesomeness known as the OVA. For the time of 1986, Maris: the Chojo could
have been a television special, maybe even a movie (but at about 45 minutes it’s kind of short), but never in a million years a TV series. But as an OVA, it’s JUST right. Also being one of Rumiko Takahashi’s lesser known titles, and much like other oddball OVA titles of the 1980s in particular, it makes collecting or hunting down these harder to find titles very appealing. Of course some titles are bad, but many are brilliant and they are all unique and different. Kind of like late 1960s/early 1970s rock music, anything went.

That and the lovely Mami Koyama provided the voice (kinda a fan of her you know?) for our short tempered red-head who can’t catch a break. Maybe Maris needs to learn about the Law of Attraction? All and all a whole lot of fun and one of the reasons I still use and love Laserdisc. …Oh, I forgot about her partner in crime Murphy. I leave that for you to learn about the crafty fox he is. No really, he is a fox!