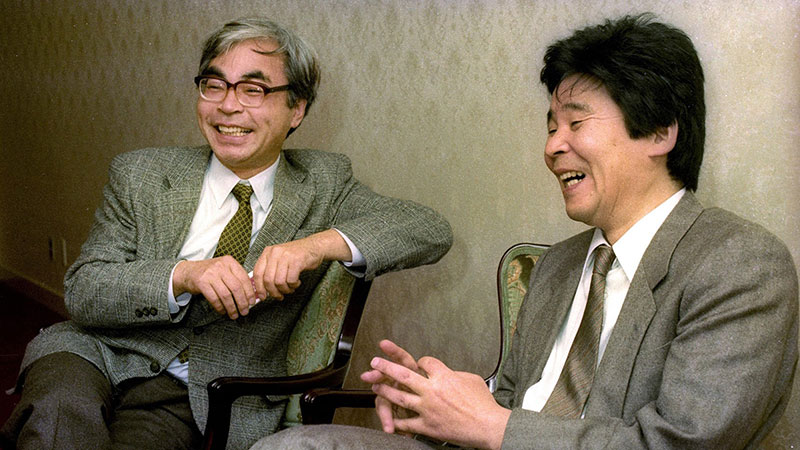 Up until recently I had given panels at my local anime convention, a run of about five years from 2015–2019. My most successful panel, and one I gave for three years in a row because of the evergreen content, was Capturing the Wind: Hayao Miyazaki and Isao Takahata Before Studio Ghibli. Obviously it was a popular event for an hour of time and witnessing Studio Ghibli panels from the past and noticing the audience turnout, I knew I had to do one, yet I had to do it my own way within the framework of my definition of ‘classic anime’. Reason being, talking about anime from the 1980s, let alone the 1960s and 1970s can be a very niche category. Most fans are younger than me, or have a frame of reference that is the most zeitgeist of properties available. By the way I was born in 1979 in case you want to do the math. That being said, how do I do a panel discussing the work of Hayao Miyazaki and Isao Takahata, two men I respect, within the confines of my focus of study? 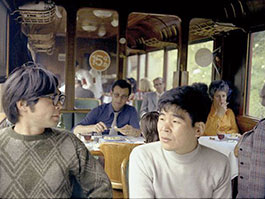 And then it happened… of course, talk about their work before Studio Ghibli’s foundation. These two gentlemen cut their teeth on a lot of movies and television series, all of this before the year of 1985, the year of Studio Ghibli’s birth. I had my content! Of course I focused on their major projects, mostly when they had the directors chair, because I could run a laundry list of doing key animation for this one episode of this series, or assists with whatever task was available for that movie. Ten productions would make the cut, each with video clip, but for here it will all be in the written word. Studio Ghibli fans, who is here to learn and experience some lost, or perhaps not so lost if one has familiarity, treasures of the careers of Hayao Miyazaki and Isao Takahata? Don’t be surprised that what you love about the work of these two gentlemen also shows up in their earlier works as well; good habits and styles never change once they solidify.

Beginning with directorial debuts for a feature film, then leading to initial collaborative efforts, I would continue with two final categories: television work, because we often equate Miyazaki and Takahata with their cinematic presence and finally a quartet of final projects from the early 1980s that directly preceded the founding of Studio Ghibli. I will not explain in detail each of the productions here, but with link them to my other posts where you can read more in depth on each particular production. Of course this panel only covered what I had seen at that particular moment. Even now I am still filling in gaps by watching other anime not available at the time where I could have had opportunities to showcase more material. But then again I only had one hour and what I had to work with was enough of a fun show.

Here were the following anime that I focused on for the panel Capturing the Wind: Hayao Miyazaki and Isao Takahata Before Studio Ghibli:

My initial goal was to showcase to Studio Ghibli fans that the names of Miyazaki and Takahata go well beyond the familiar movies we have watched time and time again. Did I succeed? I think so, but now that legacy can live here online and reach a wider audience. Of course there are a couple more anime that I wish I could have included, but at the time I had no access to the show or movie, Heidi: Girl of the Alps being the best example (watching that one now!). If you love Hayao Miyazaki and Isao Takahata, their collective work at Studio Ghibli is only the beginning to a world of many treasures which featured their creative talents. Before capturing the wind of Ghibli, we can witness the emerging portraits of these two artists as young men… a little nod to you James Joyce 🙂

Many a thank you to the work you both did. We love you!

I often wonder, was Horus: Prince of the Sun ‘born under a bad sign’? Many circumstances attempted to derail this early gem of the modern era of Japanese animation. It went over budget, it took more time to finish and even the parent animation company of Toei and it’s producers wanted to shelf this film. Why? This film had and even still has so much potential; it took chances and sounded a battlecry for a new generation of animators. And there in lies the answer as Horus: Prince of the Sun attempted to break free of the conservative standards of the day by telling a different story in both concept and direction. The results of this would honor Horus with critical notoriety over the years as one of the crowning achievements of the 1960s.

By 1968 Isao Takahata had become a solid veteran in the animation industry and gained a reputation as a leader of those younger up and coming members of the industry in the 1960s. With both TV and film work of various degrees under his belt there was one achievement that this young man had left to fulfill and that was to direct a feature film. This opportunity came, but at a price. As mentioned before from the start this movie had some nasty karma associated with it. Producers at Toei, money and time all had a hand in stopping this film, but Takahata with his quiet demeanor and steadfast approach to being a director made sure that this film would get made, finished and then released.

The major controversy of this film can be traced into the story itself. The Norse mythology and look that was used was nothing more than a cover for another story that existed underneath. Japan’s native population, the Ainu, had for generations been looked down upon yet their culture was rich and diverse. A new generation wanted to adapt a traditional tale of the Ainu and present a more serious subject matter to give animation a more mature option. Both progress and change are a part of civilization and this new generation of artists and animators wanted to be at the vanguard of this movement. This was the 1960s after all and be it America, Europe, or Japan, the youth of the period were questioning and protesting against the rules and the establishment of their day. 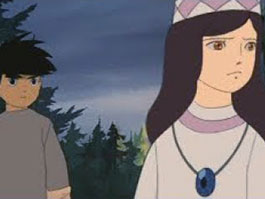 The story is a quintessential tale of the ‘Hero’s Journey’ (all hail Joseph Campbell) where our young hero Horus, sometimes translated to Hols, must integrate into the greater whole of civilization. This is a common theme I find in Takahata’s work and both sides of the extreme can be seen in Grave of the Fireflies (going against society and/or being ignored by society) on one end of the spectrum and Pom Poko (the community coming together for a common concern) on the other. Horus soon settles into a town and becomes a local hero after conquering a giant pike (fish) that prevented fish from being a food source to the local people. Soon afterwards he meets a wayward girl, Hilda, with a mysterious and unknown past and a large, very large, chip on her shoulder. Hilda is quite a complex character and her relationship with Horus is complicated and becomes a key element for the plot of the story as the film progresses forward. 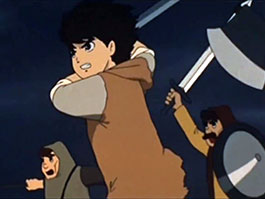 Horus: Prince of the Sun not only took more seriously the storytelling, but also on a technical level, the animation itself. This film amongst other examples of the era raised the standard of the quality of Japan’s output. Disney was the standard and Horus: Prince of the Sun is on par with the quality of the venerated classic Disney films. In certain aspects it excels, in particular with the action sequences with the pike fight and the final showdown. Of course Japan has always had an edge (my opinion) in regards to action and the movement and fluidity required to make those sequences work.

This is a film that has taken a few views on my part to fully appreciate the greatness to what Horus: Prince of the Sun truly is. Due to the issues with the production of the film it has it’s own way of unfolding the plot, which took me a little getting used to, but once I understood the whole of the scope of this film I came to love this movie. It’s classic Takahata and I recommend you to watch this one at least once to see where anime once was, where anime was going and see where this film has left it’s influence today.

… on a personal note, I dedicate this posting to the memory of Isao Takahata who passed away recently. Thank you good sir for your work and I for one will never forget the stories you shared with us all.