A dystopian future, rapid scientific advancements, hidden secret societies, high intense action and the coming of a savior of darkness to cleanse the world… yeah that sounds fun, but what else have you got to offer? Well how about massive lion’s mane hair? Oh yes, now we are talking. A possessed beast with massive hair that defies gravity, yeah I don’t care how bad the plot is, or is not, I think we have here a hit for an OVA. But then a familiar name appears, Koichi Ohata. Oh no, not M.D. Geist… again! Never fear, this time we have something different. This time we’ll dive into Cybernetics Guardian.

Meet now our protagonist. This John Stocker fellow has a bright future ahead of him. His job is to test out a mech suit made of astenite, a metal that draws in transformative psychic energy and has been used variously in many medical applications to great success. All goes well until a test accident awakens hidden powers inside Mr. Stalker. A demonic presence named Saldo begins to emerge which heightens even more so after John Stalker’s body is kidnapped by a masked and robed figure. He is taken back to his childhood home, the slums of the city known as Cancer. There evil priests revive in process this beastly creature that was once John Stalker to lay ravage onto the city of Cyber-wood. 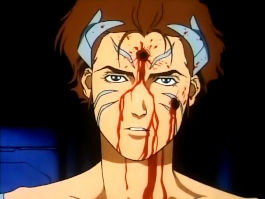 Simple and basic, this story is a generic tale seen in many comic book scenarios… “Unleash the beast within”, or “OMG, what has happened to me, I’m possessed!” Except this time our protagonist gets the ultimate coif… it has to be a weave! Cybernetics Guardian is definitely anime and has the feel we expect from Japanese hands, yet I can’t help but witness a more Western influence. The characters look more Caucasian than usual, which of course is subjective to my eye, but even the setting feels like Los Angeles from Blade Runner, which of course borrowed many Eastern elements. So perhaps we have a draw of sorts with no real side taken between East or West? Visually in terms of color and mood there just is something different in the palette that draws more into the more indie or underground American style. Maybe it’s just me?

For being a short one off production and a product of Koichi Ohata, Cybernetics Guardian is actually decent to watch. Nothing against Ohata, but many of his productions have a schlock feel too them with a touch of the ultra violent. Cyberbetics Guardian has a little of this as well, but there is also some substance under the showing off of hyper active macho gore. M.D. Geist I liked, though it is a bit on the ridiculous (so bad it’s entertaining), and Genocyber I could never get through a whole watching (just not my thing). Yet Cybernetics Guardian is a happy medium and can function well as there is humanity in the John Stocker character, unlike say Geist. By no means a top of the line OVA release Cyberbetics Guardian is well executed in terms of paint and pen and has enough of of an okay story to watch through, just not very often. It might be the crown jewel of Ohata’s early work?

Shojo + horror, or occult subject matter = yes indeed in my book. Be it CLAMP’s early work like Tokyo Babylon, or X, or 80s titles that range from the comedic, Tokimeki Tonight, or the dramatic, Vampire Princess Miyu, I enjoyed them all. Add to that the skills of Studio Madhouse and the director Rintaro with his use of color and imagery and I become even more tempted. Lastly, discovering a previously unknown one off OVA is always welcome. Three strikes and I am not far from out, but totality in… or perhaps I should say win. Let me introduce you to The Bride of Deimos.

The underworld… a beautiful woman hangs while she slowly rots away tied to what appears to be a binding of thorns. Reminds me of the opening of The Rose of Versailles where Oscar was bound up just the same, though not in the manner of being crucified. Calling out to her lover Deimos, Venus desperately requires a new body to sustain her immortality. The ever androgynous bishonen figure of Deimos knows all to well this process as he has been through this many times before. And like any hunter, he works on his next prey, a high school girl named Minako Ifu, who is the physical reincarnation of Venus. Minako meanwhile has a friend who is currently into botany and both have an interest in the orchids at a local convention. Her friend soon visits one of the contestants homes who bloomed a very beautiful blue orchid to find out how they grow such beautiful flowers. Ever worried, Minako treks towards this home to find out what secrets are being kept all to the chagrin of Deimos.

Reminiscent of the myth of Persephone where a young maiden is dragged down by the prince of darkness and the underworld, Hades, Bride of Deimos is filled with Greco-Roman re-interpreted myth. Deimos himself was the god of dread, a brother of Phobos, fear. Sounds very uplifting? This relationship of tempting the innocent girl to go down the darker path is often seen in many cultures, but Persephone‘s is the most familiar from my experience. Outwitting the Devil, temptation, or even death is very much true in Ingmar Bergman’s The Seventh Seal, where a knight is in constant struggle to stay one step ahead of Death himself by playing against the black angel in a game of chess. Minako is always outwitting Deimos, refusing his charms and even advice when he means well to keep her safe. Much like a guardian angel, Deimos is always on watch towards Minako and will save her every time she is in danger. 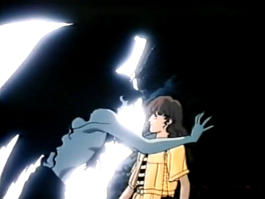 Rintaro‘s work always seems to bring controversy. He often puts so much effort into the visual storytelling that the plot often gets lost. In the bold colors, drastic lighting and occasional psychedelic madness that he is known for, Rintaro creates a mood that is often times closer to fine art than entertainment. His style is an acquired taste and works well with my palette, but I know others often mock his work. Something looked just right the moment I started Bride of Deimos and finding his name along with Studio Madhouse definitely rung out many ah-ha moments. Of course this was why this was an attractive anime for me! Added to the darker occult subject matter made this an even more tempting found prize. So many wonders and interesting material from the shojo end of the spectrum exist in plenty that I never knew before.

Even though many times we fear the dark, or the darker aspects of life, it is from those moments we start anew. Like a new moon in the middle of the night, light will return again for both the moon‘s phase and the sky. Deimos may symbolize dread, but there is always a flip side to the so called negative we often label on quick judgement. Take a walk on the wild side if you will because every one deep down loves a bad boy who has a good heart. Could you be the next Bride of Deimos? 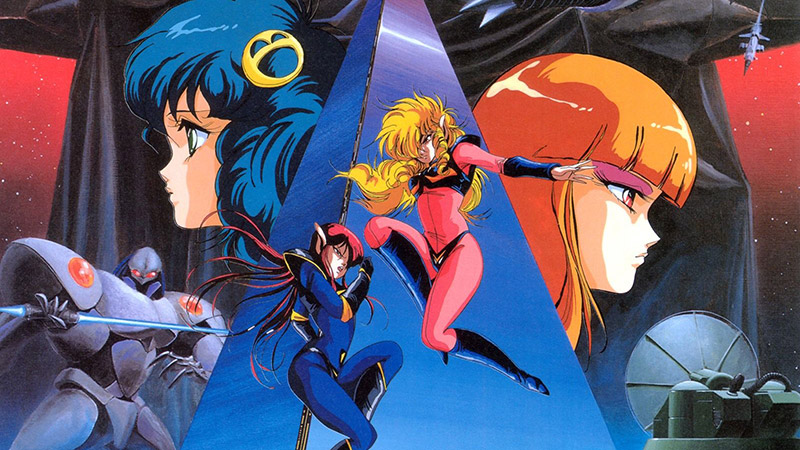 One could argue that Fight! Iczer-One could possibly pass as a modern anime besides the fact that it was all analog cel drawn animation. Fight! Iczer-One fits strongly into an action fan service styled affair that was a little unique for 1985. Perhaps this is one of the predecessors to this kind of genre that is popular to certain fans? When it comes to very early action OVAs Fight! Iczer-One is one of the better known titles and it’s fun to watch, but  I will be the first to admit that it is not on my go to list. Needless to say I salute those of you who are diehard fans, because after all it’s these little eccentric titles that we attached ourselves to that round out our fandom beyond the obvious big name titles.

Fight! Iczer-One has it’s followers and fanbase and is part of what is the yuri (girl’s love) sub genre, inserted with a lot of high octane action. As an action OVA it does a great job and is equal parts ecchi fantasy of pretty girls either kicking the crap out of each other, or having crushes and romantic fascinations, Lovecraftian horror elements and super robot mecha plot lines standards. Truly, a creative and different mix of ideas. I wonder if Fight! Iczer-One possibly had an early incarnation of going towards hentai/porn before before settling into it’s current guise? Project A-Ko, though not exactly similar, but kind of similiar to Fight! Iczer-One followed this, but in a more playful way. And according to research, yes, Fight! Iczer-One does have ties with the Cream Lemon hentai series. Fight! Iczer-One on the other hand is dark, really dark (and I usually like dark stuff?), and borrows the previously mentioned H.P. Lovecraft down to the naming of the invading aliens, the Cthulhu. From another angle, this has early LGBT themes expressed in anime and that is a positive!

The call of the hero to join the fight is strong with Fight! Iczer-One. The previously mentioned Cthulhu are searching for a new home world. They are also in the process of stopping the renegade Iczer-One from gaining contact with her perfect partner on Earth, Nagisa. Iczer-One is Earth’s only hope and her tracking down of her partner is vital to the proper workings of the Iczer-Robo. Nagisa of course is just your typical school girl where all life is perfect until one dark day when she begins to be harassed by the Cthulhu’s invading monsters. Add to this her chance meetings with Iczer-One seem awkward. “Who is this girl in the funny outfit following me all the time”, I can imagine Nagisa saying? Things change when the Cthulhu invade Nagisa’s parents and it takes her a while to get over the crybaby phase of, “Why do I have to fight? Why did this happen to me?” 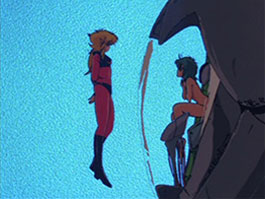 My favorite part of Fight! Iczer-One is director and character designer Toshihiro Hirano. I love his work as a whole with titles like Megazone 23 (pt. 1) (character designs only), Dangaioh, Vampire Princess Miyu and Magic Knight Rayearth (CLAMP!) standing out as personal favorites. His designs for women in particular are very appealing in a doll like way… maybe it’s in the eyes? Hirano ranks up their to Haruhiko Mikimoto and Yoshikazu Yasuhiko (and others that are not coming to mind at the moment) in my book for character designs in anime. The budget had to have been good for Fight! Iczer-One because the production looks very good in terms of detail and drawing. Many of the early OVAs and even movies from the 1980s that had the budget and care given to them were what made us go, “DAMN! Where have these cartoons been all our lives?” 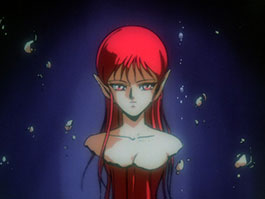 Fun, unique and a whole lot of ‘kick-ass’, Fight! Iczer-One is a standard for the early OVA market of the mid 1980s. Maybe not my favorite by a long shot, I do give Fight! Iczer-One all the respect it deserves. Also being a quick trilogy makes Fight! Iczer-One easy to digest. That and who is to say it is not one of my guilty pleasures that I don’t want to admit to? Also, how many anime have guest appearances from from Zeta Gundam that’s not another Gundam series? Can you spot Kamille and Fa? I wonder if they needed the extra money and picked up Fight! Iczer-One as a side job?