For an updated perspective on Megazone 23 (part 1), click here. 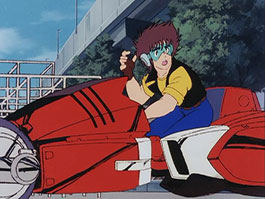 Megazone 23 could be my favorite one off OVA of all time. True there are two other parts, well three since part three is a two-parter. Megazone 23, the first one, the original, is in my mind enough of a self contained story in and of itself. After all “there can be only one!” It is a quintessential time capsule of the era (1985). Plus, to me, the open ended ending is priceless. If ever there was a production that had everything, and I mean pretty close to everything I look for in an anime, this is one of a select few I draw from my collection without a second glance.

Megazone 23 is far from the first anime I was exposed to, but I can say for sure it was the first that solidified me as an otaku. Before Megazone 23 I had a good working knowledge of well known titles at the time and that I was aware of: Robotech, Gundam Wing, Akira, Ghost in the Shell, Record of Lodoss War… you get the picture. Mostly well known popular stuff, quasi-casual may be a better term. I needed to locate more niche material. So I landed on Megazone 23 and Area 88, not a bad combination if I say so. 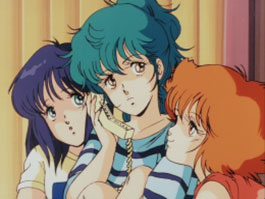 Begun as a so called follow-up to a show most Robotech fans should be familiar with, Genesis Climber Mospeada, Megazone 23 had an interesting start. I often consider this show to be the true sequel to Macross (another nod to Robotech), if not in name, as it shares a majority of it’s key staff including director Noboru Ishiguro and character designers Toshihiro/Toshiki Hirano and Haruhiko Mikimoto (three men I have the highest of respect for). I won’t get into the historic details too much, but the production started off as a TV series with various working titles until the main sponsor pulled the plug. No money, big problem, what to do? Release it direct to video since that is a growing market and thankfully, that is what happened. Who knows how much of the plot was cut to fit it into an approximate 80 minute running time? But in the end who cares, it worked.

As for the story we have a young man (Shogo) who loves motorcycles, living in the world on his own who meets a girl (Yui) and then ends up meeting the mecha (Garland) and then a nemesis (B.D.) and then a 1980s equivalent to Hatsune Miku (Eve, Kumi Miyasato’s songs are great). Then all hell breaks loose as things begin to unravel much like a peeling onion. I often think of Megazone 23 as the ultimate growing up story where everything you have learned about life and reality is ripped from right under your feet.

Being the fact that this production was released direct to video, it gave those who grew up with mecha as their preferred genre an even more “realistic” grown up story following the growing sophistication of epics like Gundam, Macross and Votoms. Of course the growing popularity of the fighting genre (Fist of the North Star, Dragon Ball and Saint Seiya) signaled an end to the television dominance of mecha. Zeta Gundam, also a 1985 release, is in my mind the capstone to an era in television where mecha grew in sophistication and serious subject matter that did not come back again until possibly Evangelion. Many of those who grew up in the 70s/early 80s now needed a new avenue to find material and in many cases material to match their growing maturity. Megazone 23 was in the perfect place at the perfect time.

And as for release in North America, there would be three attempts. First as part of Robotech: the Movie, which did not last long (even Carl Macek disowned it). Then came Streamline Pictures (Carl’s official release and a solid one) and finally ADV (the dub is totally rad man, hear it to believe it, but it is also a good effort). Both the Streamline and ADV release saw DVD releases, but are out of print.

Also is in some ways Megazone 23 can be considered an early cyber-punk release. Of course American cinema like Blade Runner and Streets of Fire were the bigger influences, but from Megazone 23 we would grow into the likes of Bubblegum Crisis, Akira and the early Masamune Shirow adaptations (Black Magic M-66, Appleseed, Dominion Tank Police) later in the decade. Speaking of Streets of Fire, released in 1984, the cast see it in the cinema during the story, talk about paying homage.

If there is one thing that bothers me about Megazone 23, it is how much another “Hollywood” property gets a lot of the credit for the concept of living in a manufactured society run by a computer, even though Megazone 23 told the story first, sort of. Director Noburo Ishiguro has mentioned how the concept is very similar to a couple of Robert Heinlein’s short stories, so Megazone 23 may not have been the first either. All told The Matrix may have sold the idea in a large scale both culturally and financially, but Megazone 23 will always be my tale for a controlled manufactured society.