For the time being I have to settle for a substitute. Arrow Emblem: Hawk of the Grand Prix was a 1977 TV series produced by Toei about auto racing and I have interest in seeing this show. One, because it’s an old show… wow didn’t see that one coming as I seem to watch anything made before the millennium. Two, I like auto racing as a subject matter as I used to be a big fan of it. And finally three, it was directed by Rintaro. I like his work. In fact this was his gig before doing the Captain Harlock tv series the next year. Yet sadly nothing exists in English in terms of a subtitled entry as far as I know. This leaves me with a condensed adaptation called Super Grand Prix. Let’s give it a try?

Thanks to a bargain bin dvd I can watch Super Grand Prix, though I am sure I have seen it online in places as well. It’s a typical shonen type of story about a young man wanting to become a professional race car driver and the ups and downs through that journey. The renamed protagonist Sean Corrigan is our hero who seems to have the worst luck in getting ahead. Soon enters a masked man… no not Char Aznable, or any other Gundam character that followed that archetype. This mystery man often talks of the great champion Niki Lauda, who by the way was a real F1 champion, three times in fact, who suffered severe burns from a crash in the 1976 German Grand Prix that almost cost his life. Through determination he would return though badly scarred. Could this masked man be Mr. Lauda in disguise? 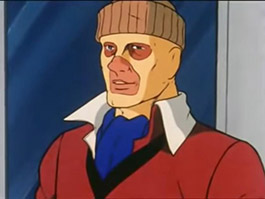 Sean gets hooked up with the right people via this masked man after an initial set back and always through out the story seems to have divine intervention on his side. Of course he still continues to make mistakes, which means in this universe it’s better to mess up than be perfect as long as you have the masked man behind your back. Talk about a guardian angel! Slightly reminiscent of Speed Racer to a certain extent in terms of setting, the look of the show is a typical 1970s/early 80s Toei stock presentation, particularly the characters. Fans of particularly mecha shows during that time will know what I mean.

Entertaining in it’s own way with the localized dub and restructuring, I found Sean’s journey in Super Grand Prix very watchable unlike another similar re-edit, Magnos the Robot. It’s a simple cartoon with basic archetypes that does not get pompous like later anime productions that take themselves over seriously; these too have their place as well, but sometimes a simple story is necessary to weed out the cobwebs of expectations. The question of how much of this condensed version was cut from the original forty four  episode is in question until I see the original version, but I know for sure that the journey has only begun in terms of our heroes journey to racing stardom.

I love the work of Hans Christian Andersen. His stories are often dark in tone, filled with allegory and meaning and are considered essential myths that we continue to have a need for… even in today’s climate. Yet some stories pass by us unnoticed until just the right time. Until a week ago I had never heard of The Wild Swans, but when I found that this story was adapted into a feature film created by Toei I had to see it immediately. I must also state that there is another story collected by the Brothers Grimm that is very similar and from general reading it seems their tale, The Six Swans, has more the influence on this movie. I had only one thing to say… Hi, can I be your friend? And as usual, seems always the case with anime, we got along splendidly. Let me tell you about our date together!

Much like another story by Andersen known to many of us, The Little Mermaid, there is much that is similar, yet also different. Both stories were animated by Toei in the mid 1970s, The Little Mermaid in 1975 and The Wild Swans in 1977, and share the basic style and form of the era. Both stories deal with prolonged sacrifice and hardship in the form of being away from loved ones and not being able to communicate vocally. In the case of The Little Mermaid, Marina could not speak due to giving up her voice, and tail as well, to be among the human world and her prince. As for the Wild Swans, our protagonist Elisa does not lose her voice at all. She takes a personal vow of complete silence as part of her cross to bear. Though she can speak, she promises not to. 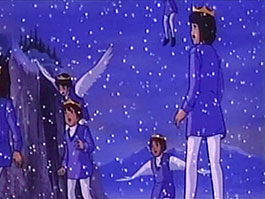 The story begins on a happy note as we meet a lost man on horseback in a forest. He is greeted by a witch who promises him a way back home if he can grant a wish for her daughter. The attractive young lady asks to become his betrothed as she has learned that his wife has passed recently. He accepts and returns to tell his children the good news. Wow, saying yes to a woman you just met without even a date or anything? Some men are quite desperate! And you know, “some beautiful roses have wicked thorns.” But I digress, he uses a magical ball of yarn to open the location where his children are to give the news of their new mother. Everyone is happy, except that conniving woman. She is jealous of the children (what a surprise!) and plans a trap by stealing the ball of yarn and meeting the children herself.

Upon their meeting miss jealous pants bestows gifts, which the six boys accept without hesitation. These garments that are given turn them into swans and when the seventh child, a daughter, Elisa arrives she sees the damage that has occurred and stands against the evil woman. Yet all is not lost, at night time the boys return to human form and comfort Elisa. Hmm, sounds like Swan Lake? Then, much like swans born naturally, they migrate away when the proper season beckons. During this time Elisa learns she can make six garments out of nettles that will return her brothers to their natural human state. The only reservations are that she cannot show any disdain, or complaint during the process and that she has a limited amount of time. Because of this she shuts herself off from the rest of the world and vows a life of silence. Now we know why Elisa losses her ability to communicate. 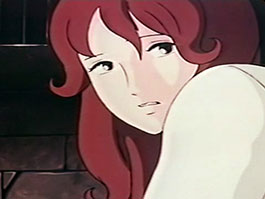 For an emotionally riveting plot that seems to point towards total tragedy, The Wild Swans does end up having an optimistic outcome. This was a surprise for me and even though I was ready for an all out cry fest ready to see something sad, I still had a little tear in my eye for witnessing a happy ending. A true tale of love and sacrifice that I can put on par with Night on the Galactic Railroad, The Wild Swans shows that a dedication to love will pay off with rewards unimaginable. And if this movie borrows from either Hans Christian Andersen, or the Brothers Grimm, or both at the same time, it does not matter. It’s a beautiful piece of storytelling and that is all one needs in a great anime. 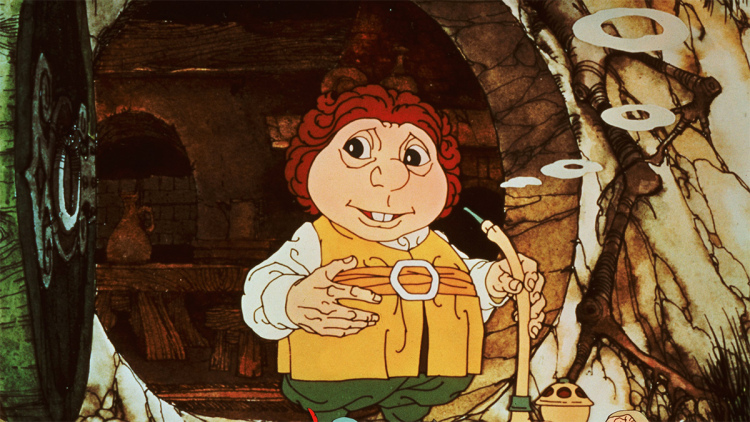 “Hello, what’s this?” One often finds unexpected treasures on unplanned journeys that alter the course of destiny. Or maybe it was all preordained? Enter the rich and full harmonics of John Huston’s voice… “In a hole in the ground there lived a hobbit.”… now thus this classic journey begins yet again. Long before Peter Jackson’s film adaptations and well before I knew the name J.R.R. Tolkien had any meaning, I enjoyed a cartoon produced by Rankin/Bass and animated by a Japanese studio named Topcraft. It is simply named The Hobbit, just like the original book, and what a grand adventure it was and still is.

“The greatest adventure is what lies ahead…”, or perhaps it is also what has gone before. I have always found animation when done properly, can become the modern mythology that we all need as a society. At least in my case, many of the central core myths and legends are these moving drawn pictures which have shaped my reality, philosophies and life. When animation meets a literary mythical giant, then you have the opportunity for something really special. The Hobbit is an excellent piece of evidence towards this hypothesis. As a kid I had no notion of Tolkien’s legend or reputation and even still I am not the biggest fan, but I do know when a story is more than just an ephemeral experience.

The Hobbit is a classic Joseph Campbell styled ‘Hero’s Journey’ were one leaves a comfortable life of safety and routine to become transformed through an unexpected event, meeting, or situation. Bilbo Baggins is a metaphor for you, or me, and his joining up with Gandalf and the company of dwarves through his adventures of Middle Earth could be yours as well, though maybe not as fantastical. What’s your favorite part of Bilbo’s journey? Meeting Elrond, Bard, or even Smaug? Perhaps the run in and troubles with trolls, or goblins? My favorite, and perhaps for you as well, was the meeting of Gollum and Bilbo’s subsequent finding a shiny ring… my precious. But not just any ring. This ring is the legendary ring of power in the forthcoming Lord of the Rings. Gollum’s voice actor in this version sets a standard in my book for being so odd, eerie, corrupt and psychotic. A brilliant performance that sends shivers down the spine and also makes one want to imitate each intonation out of respect.

The artwork has a storybook quality almost like when you are a kid and each page unfolds with a new image that brings surprise. Or perhaps, an unfolding medieval scroll that has the grit and organic quality that feeds into the imagination. The designs are a combination of Tolkien standard illustrations and the odd character designs that are attributed to much or Rankin/Bass’ output from the late 70s/early 80s. Think The Last Unicorn, Flight of Dragons, or The Wind in the Willows. Almost a hybrid of western and Japanese sensibilities that are grotesque, but appealing in a way. No one looks heroic or fashionable and this again gives the story a little more of a grounded appeal. Almost as if this production did come out of the dirt and rocks of a landscape, very natural.

The grunt of the animation and drawing was accomplished by a studio named Topcraft, which evolved eventually into a fairly well known studio known as Ghibli. Heard of that one, it’s fairly famous and popular? After all, Topcraft was the group that Hayao Miyazaki worked with on Nausicaä of the Valley of the Wind. However, Rankin/Bass had been a client of Topcraft during the 1970s and 1980s and this version of The Hobbit is a prime example of that partnership. Nice work everyone!

Short (as compared to an elongated live action movie trilogy), concise, well animated and with some sing along songs that add charm, the Rankin/Bass versioning of The Hobbit is still a standard go to for many of us. For me it is an early treasure, or perhaps a discovery, from my youth that still holds value into the current day. The Hobbit is one movie that I consider as ‘precious’, yet it does not corrupt like a particular ring. It instead enriches the soul.