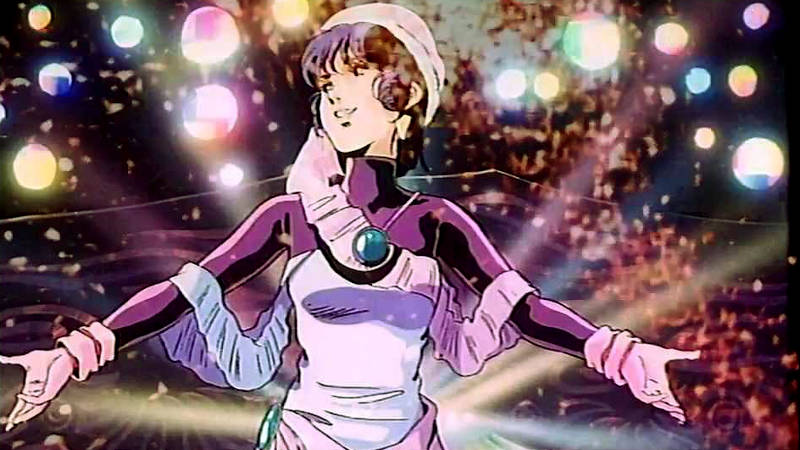 “1,2,3,4. 1,2,3,4. 1,2,3,4… Ah 1! 2!” I love, love, love the original Macross. This was a cornerstone series, via Robotech and eventually the original, that I can say without question was the most important influence for my entire interest and fandom for Japanese animation. Macross was a series that defined anime in the 1980s, redefined the mecha genre in many ways and gave us a sci-fi epic that was an original to itself. All wrapped around one of the best love triangle’s in anime history and a lot of music as well. But what happened to our illustrious cast of heroes? The answer would be given in an OVA release, Super Dimension Fortress Macross: Flashback 2012.

Many examples of complied music video styled OVAs exist in plenty during the 1980s that were offshoots from original television productions. Obvious examples include Creamy Mami’s Lovely Serenade and Curtain Call and Mospeada’s Love Live Alive. Each example would follow this idea, or direction in their own way. Macross would be an obvious candidate for this listing as well as this show made the pop idol in anime a standard character stereotype. The song book of Lynn Minmei is synonymous to the backbone of Macross as a show. She was a pioneer in every respect, so where is her representation. Come 1987, the fifth anniversary of Macross’ debut on television, we would get that very answer.

Flashback 2012 in all respects is the final part in the original Macross trilogy of releases that tell the story of the SDF Macross’ fight against the invading Zentaedi. This is the swan song for the triptych of the Macross main cast, Hikaru Ichijo, Miss Hayase and Lynn Minmei. All in all the final wrap up and conclusion for Macross’ signature love triangle dynamic. This was to be the end… and yet sequels and spin-offs would follow much later, but in the classical sense of the original, this was it. 1982 brought Macross to TV, 1984 would bring the Do You Remember Love? blockbuster film and finally in 1987 Flashback 2012. And as a fan I am really disappointed in Flashback 2012. Why?… well… maybe I had my expectations set really high.

The TV Series was a well done affair most of the time, the movie is too me, basically perfect in terms of visual expression and Flashback 2012 brings some new footage of Minmei, Hikaru and Misa including a full animated version of the song Tenshi no Eno Gu (Angel’s Paints) split in half for some reason. We get to see the new Macross life off for outer space with Misa as captain. Hikaru is still a fighter jock, a pilot’s pilot and Minmei’s career seems to be doing quite well. All three meet up again, but this is all for new material, not very much I must say. So what fills the majority of the half hour running time? Compiled footage from the TV Series and the movie over Minmei’s hit songs. Not a bad idea, but the editing and addition of early computer effects make the whole production kind of awkward. This may have been state of the art at the time, but it sometimes ends up looking a little funky around the edges.

Again as a fan I expected something a little more higher echelon in terms of a grand finale. But in the end all we have is Flashback 2012, which does in fact close the original Macross storyline and gives us a tribute of sorts to the music of Lynn Minmei. … If only I was in charge, things would have been different… if only…