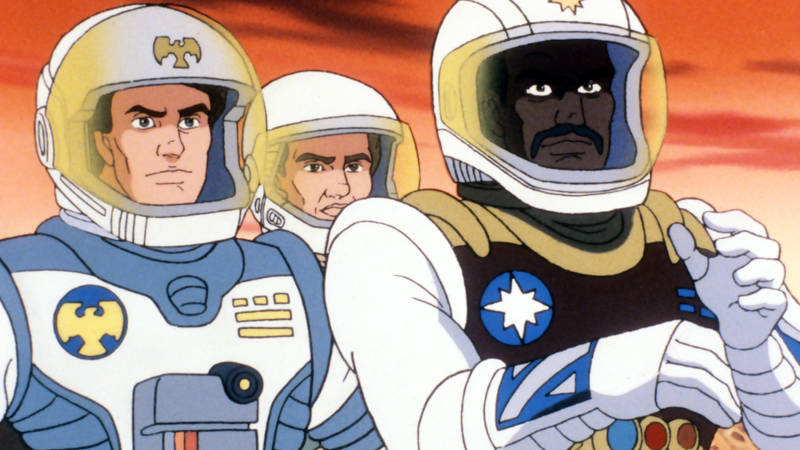 “All Starmax and Star Wolves… Scramble!” It must be Saturday morning in 1987 and excitement is in the air from that opening statement. Do you remember Starcom: The U.S. Space Force? Oh yes, now this is what I call science fiction of the upcoming future, that may perhaps be the now(?)… how can this present day be the future promised? Part of me really wants to be a space cowboy still and yet the best I can ever get to that reality of riding in a spaceship are relegated to shows like Starcom. Yippee-ki-yay buckaroos and strap on your helmets because I’m off to the stars for this one! 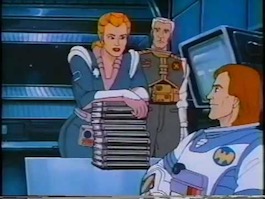 Starcom represented one of the best toy ideas from the 1980s, regardless of gender stereotyping. While it did not have the big budget punch of say The Transformers, Cabbage Patch Kids, or LEGO, Starcom did have a certain niche that makes it still today a cult favorite. Space exploration, day to day general working equipment and also military combat all wrapped up in an almost Star Trek like future, or maybe more like Legend of the Galactic Heroes? Such a great toy line, one that I often held to what the future could become, and one that I did not have… which is ok. Motorized in strategic places and including magnets in others (including the figures’ feet!), Starcom had a lot of play value… plus no need for batteries!?!. Amazing. The only time I remember playing with these toys was at a house that belonged to a related cousin of my dad. I got along well with the two sons and on the floor was a ton of Starcom. The image is a little fuzzy, but that memory I vaguely remember was a good one. 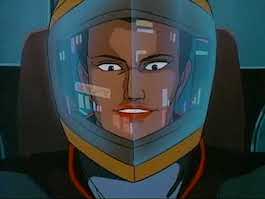 Now then this is not a site about toys, what about the cartoon? As a show Starcom: The US Space Force is an interesting bird. 13 episodes in total it was a great installment for the Saturday morning lineup of the time and stood out in many ways. A large cast of characters, a broad outlook for space travel and exploration and an exciting atmosphere for what could be our future (I am still waiting!), Starcom has so much to offer. That and this is one of the best looking shows of the era and to no surprise it was animated in Japan. By TMS (Tokyo Movie Shinsha) no less, can you see the great line work, color, lighting and events fluid movement in various camera angles? A gorgeous show… that in some ways is kind of limiting as well. 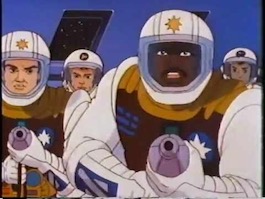 Now this is a personal opinion, but I think Starcom didn’t live up to it’s full potential as a cartoon. True there were only 13 episodes made, and we can take that into account, but I feel so much more could have been flushed out. The two factions of Starcom and the Shadow Force of Emperor Dark (nice hair man) never get into any real political struggles. True this was a toy show and the point was to show off all those awesome spacecrafts flying around, but really no stories depicting the a large scale drama of the two sides. The majority of the show highlights the ‘Big 3’ of Colonel’s Derringer, Griffin and Corbin (Dash, Slim and Crowbar), the three commanders of the three branches of Starcom, with only minor appearances from other Starcom members. Hey guys, share the spotlight a little… please? And then there’s the background music, which is awesome, but some of it sounds familiar to another DiC produced show. Is it me, or did DiC borrow some of the soundtrack from Jayce and the Wheeled Warriors? It was good once, so why not recycle it? I mean who would know? … besides hard corps Jayce nerds (LIKE ME!) 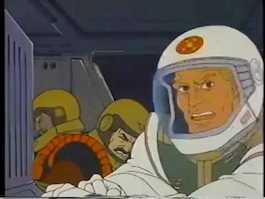 Please don’t think I am trashing Starcom as a show. Despite these flaws that are more personal than anything, this show is really top notch. Visually, as I said before, it’s one of the best looking shows of the era. The writing is clever, with comedic puns that never grow old (I have a bad feeling about this!) and on the other end of the spectrum a touch of sophisticated nuance. This is classic hard sci-fi, more in line with original Gundam, with plot lines that seemed a little more mature than the usual stop the bad guys narrative. Nantucket Sleighride, Caverns of Mars and Hot Enough For You? are three great episodes that really showed the bigger potential of the Starcom universe. I still wonder when we will have the chance to live and work in space just like in Starcom? As an idealist I still believe it can happen in my lifetime!

… now I have heard that the Shadow Force logo is reminiscent of Legend of Zelda’s Triforce, but I think it looks just like LEGO’s logo for the first iteration of Blacktron, except swapping yellow for red?