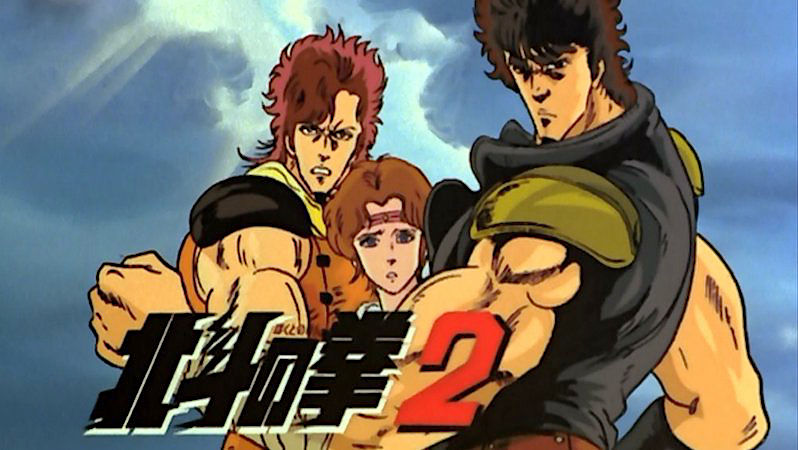 Legends never die, heroes are immortal… with all that in mind, let’s have a sequel! Considered the genesis point of shonen fighter that defined the genre we know today, Fist of the North Star was as much evolutionary as it was revolutionary. The epic tale of the wandering martial artist Kenshiro has only just begun after the conclusion of the 1984 TV series. A film adaptation would follow in 1986 and a multitude of reboots have abounded ever since. Yet in 1987 a true sequel, or perhaps continuation was released to TV. Familiar faces have returned and new foes await in Fist of the North Star 2. Are you, “A tough boy (or girl)” that knows what it means to be “livin’ in the 90s”? 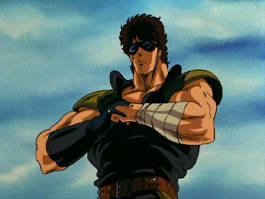 Round Two! Now then, is this going to be nothing more than just a wash, rinse and repeat series almost as if the first Fist of the North Star never ended? I thought the battling was over; Raoh was defeated and peace was brought back to the land. Didn’t Ken and Yuria get to live happily ever after and settle down, build a house, raise a family, etc.? Not completely. Three truths exist in life: death, taxes and shonen fighters are often never over even when it is over. Just add yet another arc again and again and again if the going is good. So don’t expect nothing new in terms of what you have seen before, well except for the characters we meet during this 43 episode sojourn. 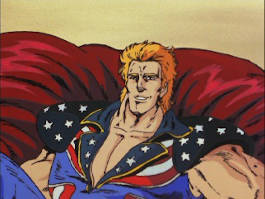 Let us now return to more familiar names. Kenshiro is obvious, this is his show after all, but two faces you may not recognize completely are Bat and Lin. During the first series they were both young children who were often under the care of Kenshiro like a surrogate father. For Fist of the North Star 2, Bat and Lin reunite and fight along side Kenshiro as they have grown into adulthood. A true surrogate family reunion. Many new quests include finding the Celestial Emperor, a journey to the Island of Asura and the distant memories as well as the ever powerful influence of the once mighty Raoh still permeate throughout the land. In usual fashion, Kenshiro ends up wanting to go it alone eventually, feeling he is the one with the cross to bear the heavy load. Oh yeah… and can you believe it… Lin has a twin sister too? 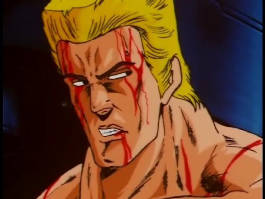 I have remarked in the past how I appreciate the type of protagonist Kenshiro is. He may be ripped and very masculine, but his quiet and caring demeanor (towards those who are just and kind) and ability to move, or fight, when the time is right is more an aspect of the feminine. He is well balanced, the definition of yin and yang in harmony, but there is more that makes Fist of the North Star appealing outside of the fighting. While Mad Max and Bruce Lee are obvious visual influences there were a couple others that I noticed watching this sequel series in particular. Fist of the North Star is the ultimate lone wolf samurai story, or put another way, perhaps the best Western ever told not in the Wild West. This is totally a Spaghetti Western in every way, but for the fact that Fist of the North Star is a Japanese cartoon about the martial arts. I prefer the cartoons (obviously) 😉 … Who needs cowboys anyway?

… and then wouldn’t you know it, about halfway through the series we do encounter cowboys. 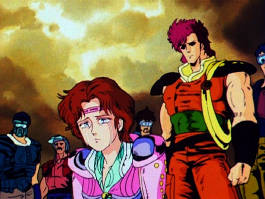 You can have too much of a good thing. I enjoy Fist of the North Star overall, but in all honesty I was getting a little tired getting through this second series. It’s a great sequel, but like many shonen fighters I often wonder when they will ever end. This second series in many ways can be considered like Dragon Ball Z to the original Dragon Ball in that for both franchises we are just moving into an evolved portion of the plot that takes place years later. After all these years I will be the first to say that after all this fighting, Ken please consider retiring. You must be tired and you have earned your time to relax my friend. But Ken as he is will most likely never retire as he is always on some sort of a journey.

By the way… even though the opening sequence said everyone was fightin’ and livin’ in the 90s… Fist of the North Star 2 didn’t look much like the 90s that I remember. Oh well, maybe I was not livin’ I guess. 😉