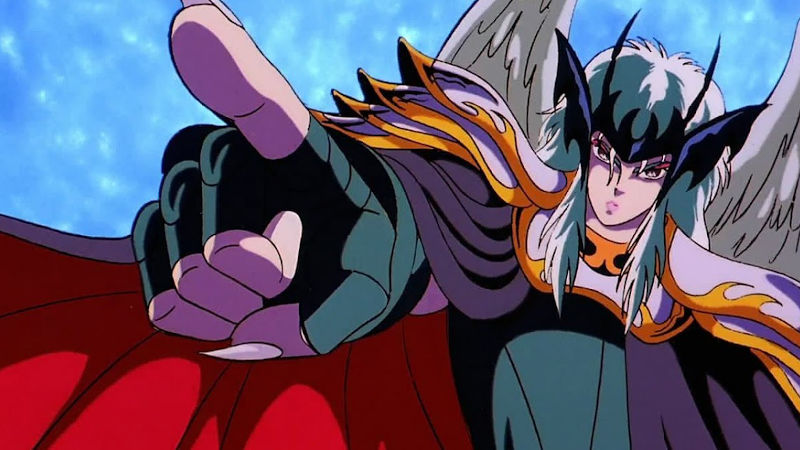 Something is happening in Sanctuary. One by one the surviving Gold Saints are taken down in the most brutal of fashion. Aries Mu, Taurus Aldebaran, Leo Aiorla, Virgo Shaka and Scorpio Milo, all murdered in cold blood. Who could be so cruel to kill the likes of Athena’s elite guard? Who could cause so much havoc and hatred in Sanctuary destroying much of the beautiful art and architecture as well; the giant statue of Athena being beheaded as an example? Only one name can be this vicious… ladies, gentlemen and everyone in between let me introduce Lucifer and the final Saint Seiya film from the 1980s tetralogy, Warriors of the Final Holy Battle.

Lucifer! Like from The Bible? The angel who was most high and exalted, beloved by God, and then fell from grace? Yeah that guy. Oh no, the devil… eh, I don’t see it that way. I follow a more esoteric study of the myth but my apologies I digressed. Back to Saint Seiya… Distraught and in tears over the death and destruction, Saori along with the Bronze Saints are soon visited by Lucifer himself. Before us is not a dark, shadowy, or menacing figure, but instead a very androgynous, bishonen type that has a touch of the gothic. Maybe he’s the original goth kid? Hmm. His return has been initiated from the anger of many fallen adversaries: Eris (Evil Goddess Eris), Abel (Legend of the Crimson Youth) and Poseidon (Poseidon Arc from TV series). Even if one is defeated and presumably dead, revenge in the heart can still be strong.

Now then, the title says this was the final battle and depending on interpretation could be the be all end all with Saint Seiya as a franchise. In some ways yes, but… well… I have to say this is more like a maybe, if not a no. I can find four possibilities: this film, the final episode of the TV series (which really was not much of an end if you know the manga), the ending of the later released Hades Chapter OVAs (which finish the manga’s story line, the most ‘canon’), or even the later released film that is supposed to take place after the Hades Chapter OVAs, The Heaven Chapter: Overture. A quartet of endings and yet with side stories and prequels, Saint Seiya even if it did once, twice, three, or four times finish, or finalize, is far from over. Let us then return to the beginning instead and the introduction for Warriors of the Final Holy Battle, a widescreen version of the TV opening featuring the rockin’ song Soldier Dream. Ending, beginnings, does it really matter, Saint Seiya is forever immortal, eternal.