We’re fired!? The look on Seiya’s face alone is enough to understand the shock that the Bronze Saints must have felt when hearing the news at the beginning of the film Legend of Crimson Youth. These boys who have dedicated their lives up to that point protecting and upholding the stewardship of Athena’s guardianship of humanity are now suddenly out of a job? And for what, some guy who strolls into town proclaiming to be her brother of all things. Is this a platonic relationship? This young man claims to be Abel Phobus, son of Zeus, king of the gods. All I see is an arrogant punk whose soul mission is to eradicate the human race as they are supposedly inferior to the gods. Saori, besides being bewildered with his nice hair, can’t you see this guy is up to no good?

Armed with a potent army consisting of new faces including: Atlas, Jao and Bernices, Abel seems ready and even recruits some ghosts from the past literally. Gemini Saga, Cancer Deathmask, Capricorn Shura, Aquarius Camus, Pisces Aphrodite!… aren’t you guys supposed to be dead? All five of you fell during the Sanctuary Arc? Apparently Abel has a bit of a skill in the arts of necromancy. The Bronze Saints don’t take too kindly to their forced resignation and in time Saori realizes the true ambitions of Abel, which displeases him. Now the fight begins and from here the usual Saint Seiya plot formula starts.

The reintroduction of the fallen Gold Saints is a nice addition for this movie as they get another shot to redeem themselves. Nice to see you guys again! Early on a few realize Abel’s plans and rebel, but the remaining group continue to fight on for Abel and eventually come around during their respective fights with the Bronze Saints. Even with the loss of these valuable allies, will Abel still have the potential to destroy the world and rid the Earth of humanity? 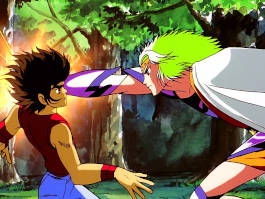 Part of the Shonen Jump’s 20th Anniversary celebration (it says so in the opening credits), Legend of Crimson Youth is perhaps the piece de resistance of the Saint Seiya 1980s film tetralogy. Of the collected four this one is the longest clocking in at 70 plus minutes and offers a plot that has a little more depth. That being said the over the top battles are still the center piece of anything shonen fighter related. With this being Saint Seiya related, the melodramatic seriousness is usually on fire and with Legend of Crimson Youth, that drama is burning red hot.