“I’m alone here. With emptiness, eagles and snow. Unfriendliness chilling my body. And whispering pictures of home.” Anyone a Deep Purple fan? Let’s enter the world of Saint Seiya and situate ourselves in the deep polar North. Houyga in his natural environment encounters a fight and meets a fallen figure who whispers the words… Asgard… Valhalla. Alone he heads to this mythical civilization of Odin (no, not Odin: Space Sailor Starlight) to find out what is going on. It may be cold up Asgard’s way, but we are heading towards the super hot with the second Saint Seiya movie, Saint Seiya: The Heated Battle of the Gods.

After a widescreen opening of the usual opening accompanied by the awesome song Pegasus Fantasy, mystery will abound as Houyga has gone missing. Three remaining Bronze Saints (Seiya, Shun and Shiryu… Ikki where are you?) along with Miss Saori go to Asgard to inquire about Houyga. He apparently has not shown up according to the local authorities who seem too in some way of having something to hide. A strange presence is felt when a red clothed warrior with a full mask and helmet passes. Something feels oddly familiar about him? This man is Midgard, one of Asgard’s elite along with Ullr, Rung and Loki who to no surprise are going to be the main opposition to the Bronze Saints. Is Asgard looking to conquer Sanctuary, home of the Saints, or are they just wanting their guests to simply leave? 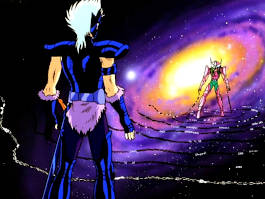 As an alternate to the filler Asgard arc from the television series, The Heated Battle of the Gods would premier in March of 1988, one month prior to the first TV episode depicting the Norse inspired mythology. Was this a trial run for that section of the show? Or maybe, the television crew thought they could expand on the idea put forth in Heated Battle of the Gods? That is an unknown on my end, but would be an interesting followup if the proper information can be found.

The Saint Seiya movies are very predictable, but each of the four films do have their own individual take on that usual formula. Case in point, Ikki often comes in to save the day for younger brother Shun, no surprise there. This of course happens as well in The Heated Battle of the Gods, but in the end Shun ends up saving Ikki. Not a bad twist in that relationship! For The Heated Battle of the Gods, be prepared for several twists, turns and surprises!