Imagine a world with the perfect neighbors. Mr. Rogers would be among them, John Lennon too and maybe even a giant furry woodland creature who represents all of nature and what is great in life. This is not just any furry woodland troll, he is in fact one of the defining symbols of a little studio named Ghibli and even anime as well. Totoro represents the magic we often need in our lives to make everything work and often times we forget this when we get so stuck in our day to day lives. Hayao Miyazaki is responsible for bringing many characters to life, but Totoro is something on another level. For two lucky children, this mythical creature would bring much into their lives as both a guardian and a loyal friend. I now want to return again to a place of peace. Return again to My Neighbor Totoro.

Another time, another place… a family buys a country home that’s slightly run down, surrounded by lush greenery and has lots of mysteries including dust sprites and acorns scattered in odd places. The story dynamic is basic. So basic I argue there isn’t really a story. It is more like the unfolding of our lives… things just happen. As the father and two girls get situated into this new home they wait patiently for the ailing mother to recuperate from an illness in the hospital. During this waiting period we find the two girls exploring this ‘Garden of Eden’ like paradise. The encounters they have are nothing like they have ever experienced before. Trees, streams and clean fresh air abound. And then, like magic, a chance discovery of a large nature spirit. Isn’t he just some kind of giant odd rabbit? Nope, he is Totoro and it is he who gives these girls the greatest adventures of their lives. Be it growing a large tree, flying in the skies, enjoying time in the rain, or riding a cat bus… cat bus?… yes a cat bus! It’s the only way to travel! 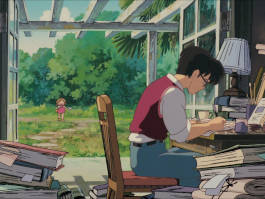 Much of Miyazaki’s experience both personally and professionally made this film the way it is. His childhood memories about his own mother’s illness and his staunch believe in being in accord with the natural world around us are ever present. In true auteur fashion the world he created in Totoro is and was the ideal childhood he did have, or perhaps wished he also had at the same time. He would craft a family film unlike any other that even to this day still stands out. This is not so much a story, but a feeling, an experience, a place of solitude. Stylistically, Totoro is as much about the totality of Miyazaki’s experience as an animator more so than originality. Why not borrow what works from previous productions; after all it ain’t broke…

From the opening credit sequence we see influence from his work on early Toei films and the short Panda Go Panda movies he did with Takahata. The giant panda from Panda Go Panda is much like a precursor to the giant Totoro n terms of stature and facial expression. The lush green of the scenery and the placing of children into the wilderness where they can run free brings back memories and influence from his work on Heidi, Girl of the Alps. The main characterization of a strong young female lead, Satsuki, is reminiscent of Nausicaä from Nausicaä of the Valley of the Wind. Little Mai could have been Mimiko from Panda Go Panda. Even the father looks a little like a young Miyazaki from my eye. Totoro could be an amalgam of everything Hayao Miyazaki had done up to that point in terms of animation? I argue that this movie is both autobiographical and a snapshot of his portfolio at that point in time.

Many of us have a place in our hearts for My Neighbor Totoro and I too have a special relationship to this film in regards to the Studio Ghibli catalog. By no means my all time favorite Ghibli film, though I admire Totoro very highly, this was my very first experience of both the work of Studio Ghibli and Hayao Miyazaki. At the time I was not very well prepared being more into sci-fi and mecha properties. Here was a simple, yet highly complex film about nature, relationship dynamics, wonder and the magic of childhood. Yet I knew something of substance was there from the very beginning. I was now in the grasp of the Ghibli and Miyazaki’s visual presentation style. A style that spares no expense in creating a world that is beautiful and as close to tangible reality as I ave ever encountered in animation. While this was not Akira, another film released in 1988, in terms of action, intensity, or atmosphere, Totoro would show me another way of visual expression. More yin in approach compared to the yang of Akira.

Masterpiece… My Neighbor Totoro is just that being a movie about simple living, quiet moments and being outside in the ‘real’ world. As I have aged these facets have become more my regular pattern of existence. Action and far out stories used to be my mythology and it still has it’s a place, but now the world of Totoro is more in accord of where I am presently. That being said I respect Totoro more today than I did in the beginning as I have grown into a place to call my own home in all the ups and downs of life. Even with the under lying tensions in the plot of this movie (with the mother’s illness), a place of serenity was found. The same holds true in many aspects of our lives. Yet it is the knowing about the simple quiet place where we can truly just be and that is true reality. Be present, be here now, I shall forever be with you my friend, My Neighbor Totoro.