Magical girlfriends, early harem influences and half naked alien ladies always fall for nerdy Earth boys who don‘t have many social skills and often get labeled as losers… Now that is a different opening statement. Sandwiched between Urusei Yatsura and Tenchi Muyo was a one off OVA that still has its cult following even to this day and can be an easy recommend to otaku types who are into more contemporary titles as a buffer to get into older, classic titles… respect your elders please! Now then, let’s have a little fun this time round with the outlandish Outlanders.

The super cynical side of myself kept telling me not to like Outlanders. Why in my right mind should I care, let alone watch an OVA which is basically about a hopeless geeky virgin guy who ends up with a bikini clad alien princess from another galaxy who for some bizarre reason falls in love with him? Really now, Urusei Yatsura was one thing to consider, but this premise again? This is space opera after all, it should be totally serious and filled with battle tactics, not his kind of silliness and pathetic romance! … Then the inner voice inside me goes, “ya know, you love Maris the Chojo!” … Well yeah, there is that … And it says again, “you LOVE Dirty Pair too!” … Oh all right then! I do love  fun antics in outer space featuring women who wear close to nothing, hello Barbarella. So step one has been reached, remove my cynical snobby side. 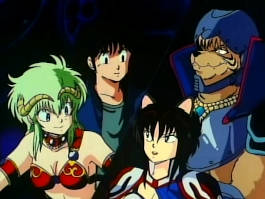 Step two and this one is so obvious. Outlanders has such a beautiful presentation. On par with cinema quality detail and fluidity, Outlanders is a poster child of why fans of 80s OVAs hold them in such high regard. Well some of them. This is a well done production and showcased material many of us in the west were hungry for, but had no idea that this could exist until Outlanders showed up in our faces. Please give us more sci-fi please… an alternative to what we have known already… yeah now that’s what we are talking about. Back to the artwork, each frame is lovingly drafted showing a passion from the artists of Tatsunoko and AIC. And as to which studio did the heavy lifting of drawing I leave that to the historians as I am just in awe over the visuals. Add to this the pacing and a solid story that never leaves one bored either… this may be one of the best 80s OVA ever made from a technical level. What do you think? 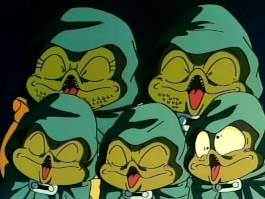 Do alpha males always triumph in the world as successful?… not this time around. Certain alien princesses like Miss Kahm from Outlanders prefer a more beta type like Tetsuya as a perfect specimen for manhood. Don’t ask me why. Only in anime can someone so unassuming become so epically heroic… sniff… it gives us all hope doesn’t it. After all that could me, or you. … Outlanders an example of insane comedy of star crossed love affairs, alien invasion, fun action, treking through outer space and how could I forget catgirls and dogmen… furry love. A coming of age story like no other. A rare flash in the pan. This may sound real cheesy, but Outlanders is so out of this world. Yeah that’s the best I could come up with. 😉