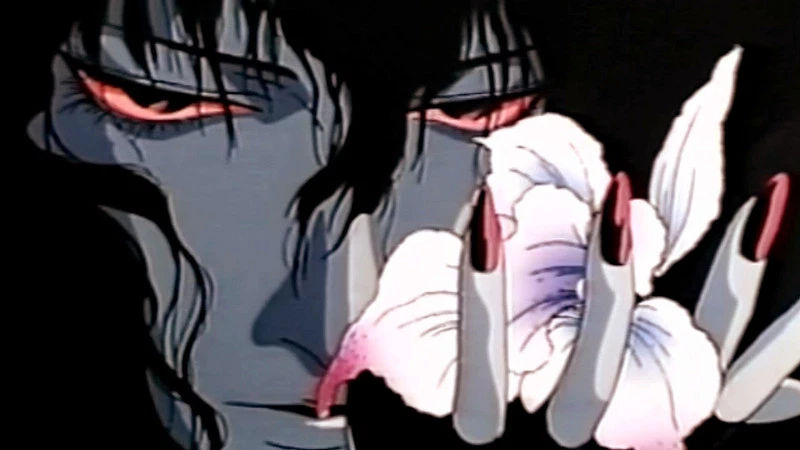 Shojo + horror, or occult subject matter = yes indeed in my book. Be it CLAMP’s early work like Tokyo Babylon, or X, or 80s titles that range from the comedic, Tokimeki Tonight, or the dramatic, Vampire Princess Miyu, I enjoyed them all. Add to that the skills of Studio Madhouse and the director Rintaro with his use of color and imagery and I become even more tempted. Lastly, discovering a previously unknown one off OVA is always welcome. Three strikes and I am not far from out, but totality in… or perhaps I should say win. Let me introduce you to The Bride of Deimos.

The underworld… a beautiful woman hangs while she slowly rots away tied to what appears to be a binding of thorns. Reminds me of the opening of The Rose of Versailles where Oscar was bound up just the same, though not in the manner of being crucified. Calling out to her lover Deimos, Venus desperately requires a new body to sustain her immortality. The ever androgynous bishonen figure of Deimos knows all to well this process as he has been through this many times before. And like any hunter, he works on his next prey, a high school girl named Minako Ifu, who is the physical reincarnation of Venus. Minako meanwhile has a friend who is currently into botany and both have an interest in the orchids at a local convention. Her friend soon visits one of the contestants homes who bloomed a very beautiful blue orchid to find out how they grow such beautiful flowers. Ever worried, Minako treks towards this home to find out what secrets are being kept all to the chagrin of Deimos. 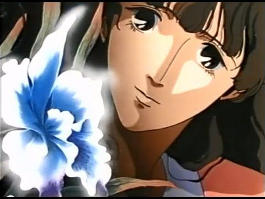 Reminiscent of the myth of Persephone where a young maiden is dragged down by the prince of darkness and the underworld, Hades, Bride of Deimos is filled with Greco-Roman re-interpreted myth. Deimos himself was the god of dread, a brother of Phobos, fear. Sounds very uplifting? This relationship of tempting the innocent girl to go down the darker path is often seen in many cultures, but Persephone‘s is the most familiar from my experience. Outwitting the Devil, temptation, or even death is very much true in Ingmar Bergman’s The Seventh Seal, where a knight is in constant struggle to stay one step ahead of Death himself by playing against the black angel in a game of chess. Minako is always outwitting Deimos, refusing his charms and even advice when he means well to keep her safe. Much like a guardian angel, Deimos is always on watch towards Minako and will save her every time she is in danger.

Rintaro‘s work always seems to bring controversy. He often puts so much effort into the visual storytelling that the plot often gets lost. In the bold colors, drastic lighting and occasional psychedelic madness that he is known for, Rintaro creates a mood that is often times closer to fine art than entertainment. His style is an acquired taste and works well with my palette, but I know others often mock his work. Something looked just right the moment I started Bride of Deimos and finding his name along with Studio Madhouse definitely rung out many ah-ha moments. Of course this was why this was an attractive anime for me! Added to the darker occult subject matter made this an even more tempting found prize. So many wonders and interesting material from the shojo end of the spectrum exist in plenty that I never knew before.

Even though many times we fear the dark, or the darker aspects of life, it is from those moments we start anew. Like a new moon in the middle of the night, light will return again for both the moon‘s phase and the sky. Deimos may symbolize dread, but there is always a flip side to the so called negative we often label on quick judgement. Take a walk on the wild side if you will because every one deep down loves a bad boy who has a good heart. Could you be the next Bride of Deimos?