When we last left the world of Gall Force, the war between the Solenoids and the Paranoids came to an apparent close with the unification of the two races. Similar to a Biblical Adam and Eve story that might have been the origin of humanity here on Earth? Yet the story we thought was once over has hardly begun. May we enter the land of sequels and ignore the previous chapter to conclude that this intergalactic war is far from over. The stakes are higher, the B-movie cheesiness is ever greater and the ladies are back once again… well at least one of them… well maybe two if you count one as an android clone with a host of new girls in Gall Force 2: Destruction.

The war between the electrical coils and the Black Sabbath fans (I am going to keep up this pun again!) seen in the film Gall Force: Eternal Story are back. Both sides have lost their respective home worlds by the start of the film, so the question to be asked is what are these kids fighting for? According to the dub, “To win the goddamn war!” Okay… and then what? You win (?) and have nothing to go home to. To top it off a majority of the Solenoid troops are now androids. I guess the yin/yang of the Solenoid and Paranoid conflict is an ever apparent component in the universe in the fact that war and strife are a natural part of creation. To separate and divide are as much an essential ingredient to all life as is harmony and unity. Wow that got deep! Especially for this anime, lol. 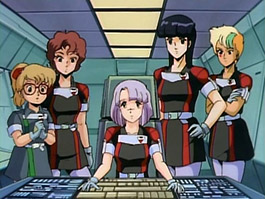 After the destruction of the Paranoid home world, a Solenoid ship picks up a strange reading from a bunch of space debris. An old Solenoid warrior craft is found with an intact life onboard that is frozen in stasis. Guess who it is? Remember Lufy (my girl) from Eternal Story? She died early on in that film, or so we thought. She is brought on board the Solenoid ship and revived after a few attempts to wake up with one hell of a come back to life hangover. After being debriefed and somewhat interrogated about having knowledge about the Species Unification Plan and Ninth Star System the battle alarm sounds. In true Lufy fashion, she commandeers an aircraft and does what she wants, which is kick some ass as a pilot in combat!

After the skirmish she is congratulated on her skills as a pilot, but Lufy ends up going into a spot of self reflection. Kind of out of character, but can you blame her… she is in unknown territory. Soon discussion comes up about the origins of a familiar, yet different character, Catty, whose clone was stationed on the Starleaf back in Eternal Story and the Ninth Star System, the third planet ito be precise, Terra and Chaos (Earth and the Moon?), the last Solenoid possibility of hope in the universe. Many Solenoid ships travel to Terra and Chaos to defend this new world, but where the Solenoids run the Paranoids will follow. Now under the gun of a Paranoid planet destroyer, Lufy’s new allies decide to invade and destroy this large threat instead of fighting the invading Paranoid fleet. Lufy must decide if her heart is in fighting on the front lines, or preserving this possible new utopia. 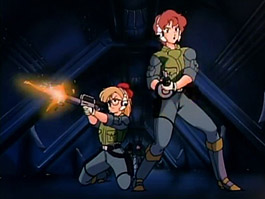 While not as ground breaking as the initial entry in the Gall Force saga, Gall Force 2: Destruction serves as a bridge linking the initial movie to the rest of AIC produced franchise. The characteristic Kenichi Sonoda character designs are back once again as well as the space sci-fi action that was laid down during Eternal Story. Somewhat forgettable and very cliche, Gall Force 2: Destruction may not be the strongest entry in the Gall Force series, but it is fun and at times funny in terms of certain scenes and character reactions. That and Lufy gets a second chance… YES!