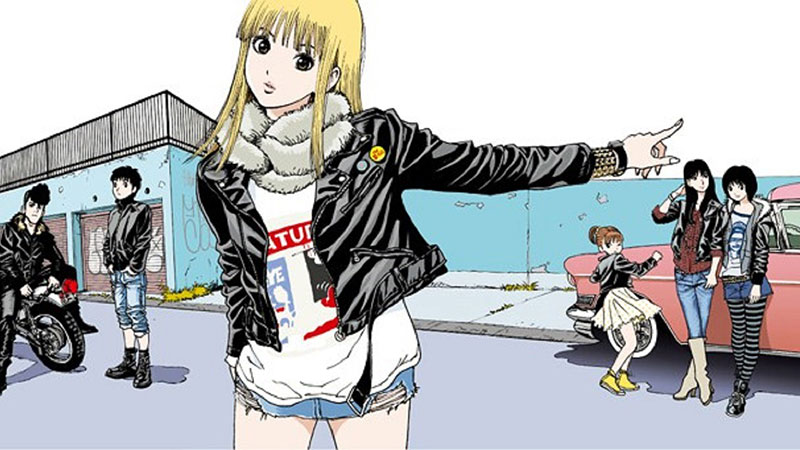 Be on the lookout for white alligators! … In essence Stop!! Hibari-kun! is like many screwball high school romance, or family comedies that can be easily overlooked. And with it being a Shonen Jump property, I am sure Stop!! Hibari-kun! goes more with High School Kimengumi in the overlooked pile being it is a sibling to more popular heavy weights like Dragon Ball, or more fitting Kimagure Orange Road (romcom over action). Gender identity, yakuzas, family and comedic sequences that stretch the boundaries of believed reality and science are what makes this 1983 TV series a laugh out loud insane asylum, though there is one joke I don’t see as all that funny, but I take it in stride.

Every show of this category has it’s niche that defines the comical plot and undertones that define other characters actions. Stop!! Hibari-kun’s! has two with the first being that Hibari is an early example of an openly honest transgender character in anime. Through she is often referred to as he, or a crossdresser, or sometimes… a… ‘pervert’? For real? Men who decide to wear women’s clothes, women who like to be more masculine, or those beautiful souls who identify as trans are not perverts! Hibari as a strong willed character defends her identity with ease because she knows she is awesome at everything… literally, she is a prodigy at almost anything! Yet as someone who grew up not as confident, and also identifies somewhere different on the gender spectrum, ‘pervert’ was a word I often associated with myself for years and even decades out of shame and guilt. Times and attitudes may be changing, but sometimes personally, we all have to catch up to ourselves to a certain degree.

The running joke of the cute ‘girl’ is really a ‘boy’… transwoman!… creates havoc on Stop!! Hibari-kun’s! other main protagonist Kosaku Sakamoto. After his mothers death he comes under the care of the Obari family, who happen to be yakuza, yet another layer to add to the plotline. Kosaku notices that old man Obari has only daughters and eyes onto Hibari… and then the secret gets out and this creates tension within Kosaku. Wow, she is adorable, but she is… this can’t be right… oh Kosaku… you know you want her! All the other boys at school are jealous that she likes you, but they see her as any other cis-girl. As even the opening credits says, color TVs have many shades of color and the same thing applies to boys and girls. If only Stop!! Hibari-kun! came out more recently instead of 1983, Kosaku may be more open to a relationship outside the cis-normative binary. 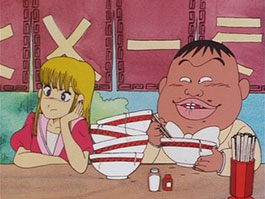 Beyond the upsetting of traditional gender roles and stereotyping, the majority of Stop!! Hibari-kun! is the loaded with stock and trade high school, family and yes even yakuza antics that can ring true no matter the show… you have to laugh because this show is very funny. This of course includes the entire cast, which by show’s end must contain the entire population of the world of Stop!! Hibari-kun. The comedy, action and even certain characters go into levels of campiness and surreal insanity that kept me wanting each successive episode. What will happen next time?, top that?, or boundaries?… limits?… let‘s break them up! This is the advantage of using animation as a medium for comedy as why be subtle when anything, and I mean anything can be possible. Yet the most poignant moment of the show was Hibari meeting someone else who is also transgender, using the term newhalf. It gave her a sense of grounding and me as well that despite all the silliness, white alligators and insanity, we can also have a sparse moment that recognizes we are not alone even if we feel a little different.

My biggest complaint beyond the use of the word ‘pervert’ was that Stop!! Hibari-kun ran far too short in the episode count. Just 35? I was getting warmed up, but alas certain show runs are often limited; I am fortunate we got we have that is available. This was a welcome entry both as a comedy and also as a show depicting someone who is transgender. I often wonder what happened to Hibari? Did she fully transition, or does she live fluidly, or something else? Maybe the manga has more to say on this… it often does usually. Don’t Stop! Hibari-kun!

Side note… the actors who played Kosaku and Hibari… Tohru Furuya and Satomi Majima respectively are husband and wife!