According to this calendar right in front of me it’s December and it is yet that time of year when many of us get ready for that holiday known as Christmas. While many of us get a little cynical at this time of year due to all the high amounts of stress, the over spending, or eating a little too much, we often over look a basic fundamental. The daylight is short and it’s colder outside for us in the northern latitudes (I envy you all in the southern hemisphere), but… but there is still something to look forward to on the near horizon. I myself don’t technically celebrate Christmas anymore, yet I am still within the festivities (I prefer to see it as the Winter Solstice), I still love and treasure Christmas cartoon standards like Frosty the Snowman and I feel no matter how you celebrate this time of year, Frosty’s story can inspire all of us to try yet again. 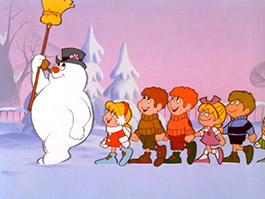 It all started with a simple song about a snowman who came to life all with the help of a magical hat. Recorded originally by Gene Autry and Jimmy Durante and re-recorded by nearly everyone you can name under the sun, Frosty the Snowman is a playlist staple during this time of year. Yet there is also the animated cartoon brought to us from Rankin/Bass from way back in 1969 to enjoy as well. Wow!, this makes Frosty 50 years old this year and he still does not look like a day older than… how old was Frosty anyway? A newborn? After all, he just came to life one day from a magic silk hat picked up by a bunch of kids during recess. Just a throw away item from a supposed magician whose rabbit sidekick has infinite times more talent than him. Yet this mean old magician wanted that hat back after seeing the potential of bringing a snowman to life. Tisk tisk. “It isn’t yours anymore, you threw it away!” 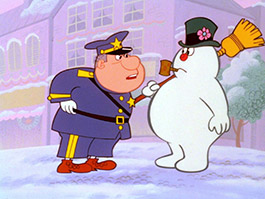 The story is a simple travel adventure with Frosty, Hocus Pocus (the previously mentioned rabbit and my favorite character!) and Karen (one of the children from the school) making their way from their little modest town all the way to the North Pole to see Santa Claus… who else! The North Pole of course is a cold place year round with lots of snow, so it makes a perfect habitat for a naive and jovial snowman. Plus Santa Claus will be his neighbor, always a bonus. They run into a cop who swallow a whistle, get chewed out from the train ticket attendant for not having any money and are always one step ahead of that mean old magician. Give up the hat man, it didn’t go with your complexion anyway. Will our heroic trio make it to the North Pole? Will they meet Santa?

Now for the fun part… just what is Frosty the Snowman’s connection to the Japanese animation industry? Rankin/Bass for years have used several studios in Japan for a majority of their work and Frosty is no exception. A studio by the name of Mushi Production would hold the honor of doing the heavy work of making Frosty come to life.… so it wasn’t just the magic hat after all, hmm? Mushi Production was Osamu Tezuka’s original studio that turned out many a classic like the 1963 version of Astro Boy, 1965’s Kimba the White Lion and 1967’s Princess Knight and even the adult gothic film that put the studio into backruptcy, Belladonna of Sadness. Frosty the Snowman, even though considered an outsource job, is a good cousin to what we call anime.

A film I am sure we have all seen 1,000 times and perhaps may get another 1,000 views into our near futures, Frosty the Snowman connects us with what we love about the winter. It is a time to reflect, remember and contemplate on where we have been through out the year, yet it is also a time to start new into a new year, the future. Winter is a like a bridge and sure as clockwork Frosty the Snowman will be a part of of our winter festivities and traditions for generations to come as it has for generations in the past. No matter how you celebrate, have a great winter and holiday everyone!