GOD… MARS! ROKUSHIN GATTAI! I get chills every time I hear that when our hero Takeru Myojin prepares to bring together the six robots that make up the ultra cool Godmars mech. Released in 1981 during the space opera and mecha high times in the anime world, Godmars is a fine mix of the two. It’s far from a perfect mech show, or anime in general. So many anime fall into this pit trap, yet we still attach to them anyway because we found some redeeming qualities that end up resonating with us. Now strap in and get ready for one of my favorite super robot tales from way back when. This is Rokushin Gattai Godmars, often shortened to Godmars.

Godmars holds a special place in my heart in that this was the first super robot show I tackled to completion beyond the ‘Voltron’ universe (be it GoLion, Diarugger, or Voltron itself). The time had come to grow up and move beyond the usual pastures and venture forth into the lands where alternate antiquated robot shows lived. Pictures and articles at first fulfilled speculation, next came the process of tracking down media. Godmars would present itself via a VHS tape of the 1982 compilation movie. Soon the film and the entire TV show became available on the fansub circuit and became the avenue that I digested the missing parts of the Godmars storylines. … Now disc based media exists as well, an eventual purchase on the horizon… maybe?

Loosely based on an original manga (Mars) by the legendary Mitsuteru Yokoyama, Godmars turned into an epic space drama; a huge departure from it’s more Babel II-like roots. Takeru Myojin, our protagonist, is a 17 year old member of the Cosmo Crasher squad, a group dedicated to Earth’s protection during humanity’s age of heavy space exploration. This all takes places in the far off future of 1999, which for 1981 made sense, but nowadays seems a little… dated? It is 2019 when I am writing this entry and where is all the cool space travel and super hi-end technology? Back to what 1999 could have been… it seems that the Earth has encountered a race of aliens, hostile of course… why not friendly ones? An emperor named Zul, along with his Gishin empire, are determined to conquest the universe and Earth is the next stop. 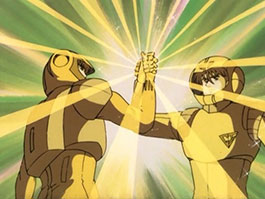 It turns out Takeru is not an Earthling and is in fact originally from Gishin. He was found as a baby by his adopted father and raised on Earth… hmm… sounds like Superman. Takeru learns his true identity is Mars and that he also has ESP abilities. So he is an esper?… yet another late 70s/early 80s trope. That and he soon learns he has a guardian robot which he can pilot as well, Gaia. OK then, I wonder if he has any surviving family on Gishin? Turns out he has a twin brother, Marg. Wow, talk about a lot of elements for a run of the mill mecha series! Plus let’s not forget the big bot of Godmars as well. Takeru while piloting Gaia combines with five other robots to create this nicely designed piece of engineering. The only thing that is missing here is a romantic element… and Godmars has that as well, via the conflicted character of Rosee (pronounced Ro-zay). Lots and lots of ingredients in this stew of a series… and this is only the first of three story arcs. 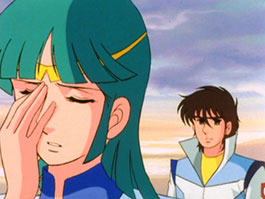 It is Takeru Myojin for me that makes Godmars special. He is not the usual mecha/shonen archetypal character. Neither the funny goof ball, nor the hotshot masculine tough guy, or even the bratty complainer, Takeru is at the other end of the spectrum being more sensitive and gentle. A nice change of pace and a great way to show masculinity can have a tender side. On the other side of the fence, my only real issue with the show was that the romantic elements and sparks between Takeru and Rosee are never really flushed out. and even though this is a shonen action show, I really wanted to see at least one kiss between these two… just one! Not the end of the world, but I am a sucker for anime couples… maybe there is some fan fiction somewhere?

While it was not a gateway drug, Godmars became for me a crucial next step into my journeys into classic mecha anime. The heavy melodrama and space opera were key elements I needed at that time of my fandom as this was just the answer to my many questions needing a solution. The only thing is that from one would come many more series to watch, yet I never forgot what Godmars showed me in the beginning and I still enjoy a watch from time to time.