For my original entry for The Rose of Versailles, click here.

Sometimes you have to recover your tracks in order to move forward. In terms of classic anime and in particular, The Rose of Versailles, I have a little more to say… 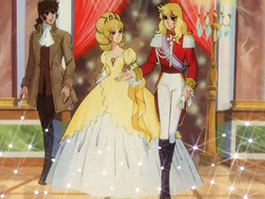 Sometimes I wonder if I will ever rewatch certain shows that sit on my shelf or on a hard drive ever again? About a month or so ago I have given one particular show a second go and by the title of the entry it is of course The Rose of Versailles. It seemed like the right time. I didn’t question it, or wonder why. I just needed The Rose of Versailles. After a tough winter with nasty snows, isolation, some setbacks and a gnawing, or itch that chronically comes and goes, the The Rose of Versailles became a sea of calm and a vision of reassurance to say… hey, everything is will be ok. … OK time to get personal.

The Rose of Versailles has high regard for being a standard of … anime excellence. Shojo perfection. Though I feel the show goes beyond the general demographic, as most anime does in any case. And with the show turning 40 this year of 2019, it still looks and presents flawlessly. What a gorgeous masterpiece of visuality. The first half directed by Tadao Nagahama is bright and sparkly reflecting naive youth and the second half of Osamu Dezaki (GENIUS!) is gritty and intense showing the politics of revolutionary France. Beautiful and timeless, a show I am honored to share as a virtual twin (both RoV and I joined the world in 1979). 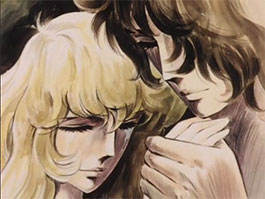 So what of the personal? The Rose of Versailles’ main protagonist. Oscar Francois de Jarjayes. is one of two women in anime that I whole heartedly admire; the other being Remy Shimada from GoShogun. Blonde, graceful, intelligent and independent speak to both ladies, but Oscar has something else, a particular fragility. Her sense of duty as a noble, a military commander and her enforced gender classification. Raised as a ‘boy’ and expected to follow into her father’s footsteps, much dysphoria abounds in the beautiful Oscar. This expectation of a gender role, to be a ‘man’ in public, tugs at the truth in her heart that she is a woman. Yet also the role of being a noble who has lived in luxury and comfort and seeing first hand the life outside the gilded cage. Being rich and powerful in a position of authority is not all that it is cracked up to be and the same goes for being a ‘man’ as well. To quote Alan Watts, “don’t envy rich people, it’s a great mistake. Don’t envy anyone.” 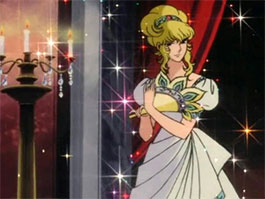 Personally I understand both of Oscar’s dilemma’s. I am not ‘rich’ in the way we often think with lots of money, fancy car and house, etc. I am comfortable, yes, as I live in the U.S. and have a ‘job’, but I have great health, my mind and intuitive senses. No amount of money can put a price on those three. Living in the affluent west and seeing much of the flash from TV screens, luxury items and being in stores with a glut of stuff… ok most of it can be classified as crap… that is constantly being barraged through every sense imaginable I question, is this all life is? Is this to be my life? Living in a gilded cage of constant consumption where we are taught there is never enough and you have to bleed yourself dry in order to fit in? Like Oscar, I see the ‘nobility’ of our backgrounds as not real and limiting. Monarchy or capitalist state… looks about the same to me? We just need more corsets and petticoats instead of suits and wingtips. The other dilemma of playing the role of ‘being a man‘, what is that really? Only a facade?

In terms of the winter of discontent from 2018/2019, I had The Rose of Versailles as a catalyst to pull me out of my depression. Watching this time round made personal issues come into a better perspective; as well as waking up occasionally in pools of tears. This of course was my reaction to The Rose of Versailles. Beyond these personal points, it is a show about love, politics, desires and revolutionary France with occasional sparkly eyes. God I love shojo anime! It’s a masterpiece and I hope for this show, or any particular anime that you watch, that you take something of it with you to heart. Because sometimes a show is more a mirror of your inner psyche than just ephemeral entertainment. Think about that one!