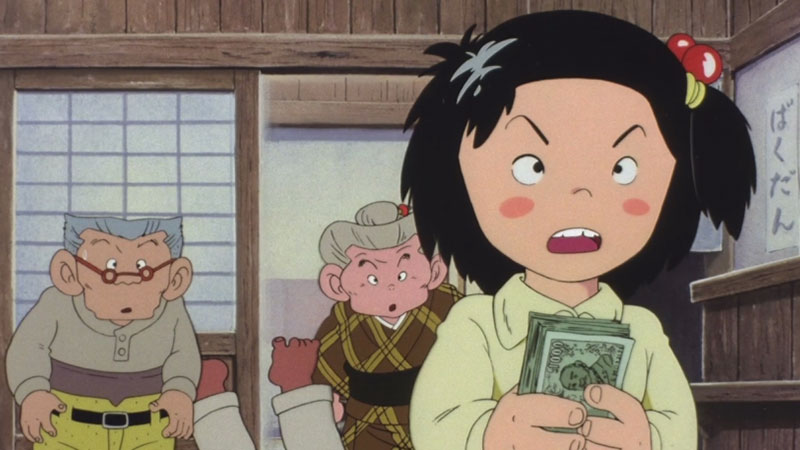 If there is one truth of Isao Takahata, is that he is a master storyteller who uses the most basic fundamentals of human relationship dynamics. Takahata’s partner in crime at Studio Ghibli, Hayao Miyazaki, can wow a crowd with his knack for showmanship and feeling. Yet Takahata’s work is more reserved, quieter and yet it has a charm that Miyazaki just can’t touch. In the handful of years before the founding of Studio Ghibli, that being the early 1980s, Takahata would help to create a couple gems that equal, or even at times, surpass, his work at Ghibli. The first of these was the adaptation of the manga Jarinko Chie, translated as Chie the Brat. 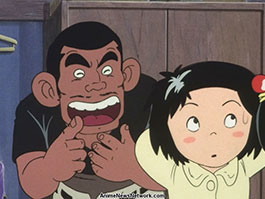 Now you can say Chie the Brat is a story about everyday life in Osaka. I have come across this idea in many places, but I think this movie can mean something else. This is a story about one character, one girl, and the world she both lives in, but also the world that she has influence over. Often times we may ask ourselves what purpose do we hold in our mundane activities in this world? Many of us are not famous, or even our popular, but still we all have an impact that spreads like a ripple in water from a thrown stone. Our actions and the people we meet all create change in small, yet subtle (or even major) ways that become something greater. So a story about Osaka? Yes, but then again Chie the Brat can be a story about any town, anywhere and anyone. It’s a story about all of us no matter who we are, or where we come from!

Let’s meet our protagonist, Chie Takemono. A working class girl, who is quite bright and intelligent, yet schooling takes a back seat as she is more often cooking skewers at her father’s little hole in the wall restaurant. Where is dad, Tetsu? Out gambling from borrowed money from his father and getting into trouble with the local syndicates. Now what about mom, Yoshie? Separated from Tetsu at the moment and occasionally she gets a visit from Chie. True Yoshie loves Tetsu, but Tetsu needs to straighten up a little. A slightly dysfunctional family? Yes, but not a cynical way. Like most relationships it an get difficult, but usually there is a compromise, or maybe perhaps a glue that can hold things together, or make things work. And of course the is Chie’s job. …Hang on a minute I forgot about someone. I can’t leave out Kotetsu. He is the ultimate and coolest character in the whole movie simply because he is a cat. A cool cat, a street fighter who is a sweetheart and Chie’s adopted friend. NOW! the family is complete.

As I mentioned before about how this film is about the influence one of us has on others that surround us, I can’t help but see a Pollyanna quality to the story. Yet Chie is not too overly optimistic, she has a little chip on her shoulder, but that’s what makes her truly… human. She has heart, but a little of an attitude. She may not be the prettiest girl on the block, but she has a beauty that is rare. She may not be perfectly book smart, but she has a strong connection with her gut intuition, which to be honest is more important than knowing outright ‘facts’. It would be interesting to see the story beyond Chie’s years of youth because if she can harness those qualities she could become a very successful adult. 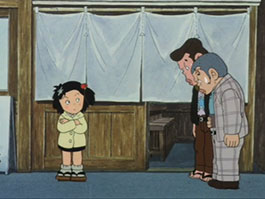 So yet another gem helmed by the venerable Isao Takahata. This entry covers the film version, but there was also a television series that began the same year of 1981 (in case you need more Chie in your life). I don’t think Takahata was affiliated with the series, but I could be wrong. I had enough of a time getting my hands on this film version and graciously I was happy to get the chance to have the opportunity to watch this one. I rank Chie the Brat highly as one of Takahata’s best films if not his best (depending on my mood and the day of course). If you can find this one I won’t recommend you should watch it… I demand you watch 😉