Who needs Prozac when instead you can have Project A-Ko instead. You will have zero side effects, except having a big smile on your face and laughing most of the time. Now that’s a prescription we can all agree on. An 80s otaku’s wet dream of self referential parody fit into a sci-fi school comedy that has a plot so big and out of left field that it could only be… well, brilliant. A staple for any collection, the one, the only, the Project A-Ko. 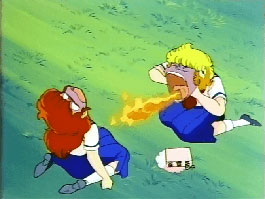 If ever an anime encapsulates the decade of the 1980s (well at least up to 1986 at least), it was Project A-Ko. Rising from the ashes of a failed pornographic project (odd start, eh?), Project A-Ko would turn into a self referential love fest for 80s otaku culture. And in case you miss the references to classics such as Macross, Captain Harlock, Fist of the North Star and Creamy Mami just to name a few, you are still in good hands. A joke is a joke and humor knows no boundary, but if you get the reference, you laugh twice as hard 🙂 Also of note is that we have another level of parody. Wait… more? OH YES! Heard of Jackie Chan? He had a movie out at this time known as Project A and this as well crept it’s way into the film in no minor way by of the title itself.

The plot of Project A-Ko encapsulates around a triangular relationship. Super-heroic (literally) A-Ko/Eiko is the best friend of perhaps the queen of all crybabies, C-Ko/Shiiko. They laugh, walk to school and go shopping together. Plus, they are in the same class; talk about being tied to the hip! This does not bode well with another fellow classmate, the snobby rich girl B-Ko/Biko. She wants C-Ko for her own and jealousy exudes on to how she can foil the impressive A-Ko with various nefarious plots including using her posse, building mechs and finally making a powered suit that leaves little to the imagination. This suit and the final fight she starts with A-Ko to claim her supremacy becomes the center point of climactic action and in my opinion the cornerstone of this film. Beyond a normal high school cat fight, this altercation between A-Ko and B-Ko is more like a beautiful dance than an all out brawl. 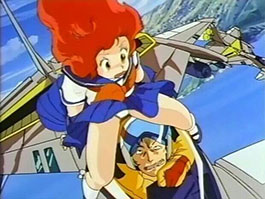 And if that wasn’t enough for a plot, let’s also add in some humanoid aliens who are in search of their long lost princess… C-Ko. Bizarre beyond definition is why everyone, and I mean everyone has something for C-Ko? She is one annoying character don’t you think? To each there own I suppose. Loud, immature and lacking in cooking skills (scary bento lunches) and as I said before the chronic crybaby. I am not here to judge, but I must call into question the rationality for begrudged rich girls and alcohol infused alien ship captains. Then again, rationality and this film are distant cousins six times removed.

Outside the plot, there is another memorable piece that is special to Project A-Ko, namely the soundtrack. Not because it fits the movie so well and encapsulates the era, but because it represents rarity back in ye olden days of anime. The soundtrack was outsourced to a couple young musicians, Joey Carbone and Richie Zito, in the Los Angeles area. This Japanese product used American music sensibilities to spice it up it’s presentation. The East met and collaborated with the West on a project decades before it became commonplace to our zeitgeist. Besides the instrumental tracks written and performed by the boys, there were three stand out songs sung by three different ladies. One of whom was none other than Samantha Newark, better known as Jem of Jem and the Holograms. Samantha of course was the speaking voice of Jem, but this movie showcased the fact that her voice acting wasn’t her only talent. She is a diva of a singer as well.

Project A-Ko is simply too much fun. An entertaining movie that never takes itself too seriously. The exception though would be in the drawing department. Project A-Ko is an animation playhouse created by individuals who expressed their joys and talents into a project that may just be the best goofy action movie ever made.