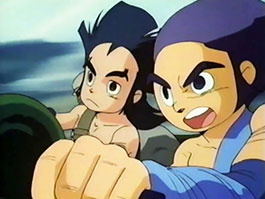 Tomonori Kogawa; can I see a show of hands who enjoys this man’s character designs and artwork? Or perhaps, how many of you know of this man at all? If not I hold nothing against you since he is not a well known name in the vain of say Miyazaki, Yoshitaka Amano or Gundam’s Yoshikazu Yasuhiko. Kogawa was a staple of early 1980s mecha shows; ever see Southern Cross (Robotech’s Masters saga), Ideon, Dunbine, Xabungle, L-Gaim, or even Odin: Photon Sailer Starlight (OH! ODINE!!!!). If you are familiar with these productions then you are framiliar with Kogawa’s particular art style, but he also worked on a couple smaller pet projects as well. One is called Greed, but let’s look at one called Cool Cool Bye for this entry.

Cool Cool Bye. Cool Cool Bye. What does this title mean? I don’t know. Sometimes it makes me think of something that a baby would say… like Goo Goo Gah. Not saying that this OVA is for infantile intelligence (it’s not OK), but there is a fun almost child like simplicity to the art style, the dynamics of the motion and the spastic comedy which makes me think of more pompous, or perhaps ‘fancy’ terms like say surrealism, or even dada… oh great now this guy is going into early 20th century fine art… ! …make art, not war people. Cool Cool Bye is for me, kind of like the leftovers of Xabungle and Dunbine (we even have the cute fairy girl archetype again) mixed with something like Birth, or from a more modern eye, Gurren Lagann. This is the basic foundation of Cool Cool Bye and to top it off, this OVA is a manageable half hour of duration.

Now since this is only an approximate 25 to 30 minute run, don’t expect something super deep and life changing. Giggles, laughs and ridiculousness is all that is required; popcorn can be optional. We have a basic plot here… two boys who are supposed warriors from a particular tribe are helping a little village get rid of a gigantic mecha known as the Tanguin, or Penguin (the fansub had both, perhaps it may be down to a regional dialect between the characters?) that is stealing all the women for some particular reason. And with a lack of a female population that means no continuation of future generations. Who or what would be stealing all the women… perhaps some dirty old man? AND I JUST SPOILED THE ENDING! Except I forgot to mention that the boys need to fill their stomachs first before any shenanigans can begin. Silly heroes always need to gorge food in anime, at least they won’t go into battle hungry, ya know?

And what about the little fairy girl? At first I was like hey it’s Cham/Chum Huau from Dunbine (and whatever her name was in L-Gaim, please don’t make me revisit L-Gaim) in for a little cameo. But no, the little fairy girl transforms and changes into the pretty ‘it’ girl and very funny comic relief towards our duo of heroes. She essentially lays down the rules so to speak (don’t be no naughty boys), but also acts as the deus ex machina or McGuffin device to a pivotal moment near the end. In the ever constant of comedy and hijinks we get a singular moment of sentimentality… nice touch!

While not the most well known OVA, and perhaps there is a reason for this, Cool Cool Bye is a fun oddity of rarity. Not so much a diamond in the rough… more like a happy accident, but one that I was satisfied with. If you don’t enjoy the plot for any reason, just put Cool Cool Bye on mute and enjoy the scenery so to speak (because pretty pictures in the background makes the world a better place!), or make up another script if you are so inclined. For me though, I liked it!