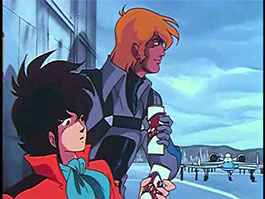 It’s #100 and I saved this one for this occasion. 🙂 In the far future of the year 1999… oh wait it’s 2018 now… don’t you hate it when the once thought of far future becomes a past memory? Well let pretend it’s 1982 once again, when a little show created by a bunch of anime and sci-fi fans hit the airwaves. Their story as stated before began in the year 1999 when suddenly a warp gate opens, bringing a behemoth of a spaceship into our local area of interstellar space. And much like a wild meteor with a mission, this ship came down like a speeding bullet onto a little island in the South Pacific. Ladies and gentlemen we humans are most definitely not alone anymore and this lone fictitious event in the sky is the beginning to THE most important anime in my whole fandom and life.

Love is something you can’t describe with simple language and if you can, it really is not the passionate love you should feel from the bottom of your heart. In 1985, as an impressionable six year old, via an adaptation named Robotech, I fell in love with the most beautiful of space operas. NO, one of the greatest mecha anime ever. NO, the greatest love story that I have ever encountered. Well… maybe all three combined. I had experienced a story, characters and emotions that resonated with me on a level one cannot define. This was and still is a title many of us hold in the highest regards as something beyond special. It was one of my gateway anime and remains to this day the yardstick that I measure anything else I watch up to it… Super Dimension Fortress Macross.

Coming from my perspective and fandom and with all the variety of opinions already stating what happens in the show, the only thing I can give is what Macross has given to me on a personal level. Macross is not a television show, or even an anime. It is a part of my family, pure and simple; close knit family to be exact. These are my adopted brothers and sisters, aunts and uncles and best friends. Even though the cast are not with me in the physical plane, they have been instrumental in keeping me alive, healthy and happy. Macross for me is the Beatles’ In My Life, “there are places I remember… some have gone and some remain… all these places have there moments… In my life, I love you more.” I don’t see this posting as another entry, this is a soliloquy in the form of a love letter. 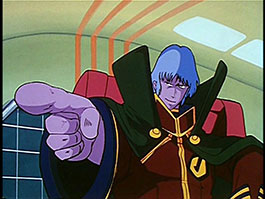 Much credit to Macross is given to Shojo Kawamori (way too much!) almost as if it was “his” project alone, which of course is NOT true! But again where did Macross come from… a manga, toyline, yada yada… nope? It was it’s own creation, completely original and influenced by a group of young creative fans. An almost proverbial otaku’s dream come true, the purest form of fan service. Not the emphasis on the usual definition of fan service, but the wanting to add reference upon reference making the story grand and sentimental. You can give credit to others like Noburo Ishiguru or Ichiro Itano, but one individual makes Macross very special (my opinion)… the greatest character designer ever (again my opinion), Haruhiko Mikimoto!

Mikimoto’s eye designs are always what win me over. Beautiful eyes with a romantic quality, they glisten like stars in the night (Mikimoto insists it was a shojo influence). Therefore this is the best looking cast ever (my opinion yet again), particularly our main cast… the perfect trio, handsome Hikaru, elegent Misa and adorable Minmei. Beyond the ‘main’ cast you have a huge subsidiary group and all of them get a couple minutes to show their individuality, but I have only been speaking of those of us who are all Earth born. Macross, after all, is an epic space opera and humanity meets another race from a far off area of the universe. Remember that spaceship I mentioned earlier that crashed onto the Earth… it is of interest of giant alien race, the Zentradi.

Thus the plot begins… a spaceship gets refurbished, an alien invasion leads humanity into outer space, a war ensues, a young girl’s dream of becoming a pop star comes true, a love triangle becomes difficult and the questioning of the origins of both humanity and the warlike Zentradi are tied to the mysterious Protoculture (not exactly the same thing as in Robotech folks)… and stretches over 36 episodes in total. Wow! Busy show indeed and never boring. No wonder Macross reached the tops of popularity since there is something for everyone to enjoy. But then again like I said before, this was a show made by fans of anime, manga and sci-fi. They knew which buttons to push to get the reactions which we all can identify with.

Wait a minute… I forgot to go into detail about one important piece of Macross that I love. One word… MUSIC! Music plays a major role in the plot and the soundtrack is oh so good. I love music, I play music and great music in an anime is a thumbs up from my end. Kentaro Haneda’s orchestral work is inspiring and certain tracks, in particular Dog Fighter, are anthemic. The character of Minmei and her pop idol status was one of the first iterations of this character archetype. Love it or hate it, Macross would not be the same without Minmei as the cheerleader so to speak. She was the true star of Macross, yet not the major protagonist who was Hikaru. Her simple pop songs, a blast of culture more precisely, changes the course of events in this show. Love conquers all, literally.

The closing titles features a song called Runner, a sentimental ballad. And I will end this entry by saying that Macross and I have run together a long, long time (hard to admit you are getting older, but wisdom is worth the age!). Hand in hand, Macross and I will run forever. …with 100 postings down, it’s time to write another 100! 🙂