Do you know The Guyver? Sure you may be aware of the epic 12-episode OVA that was released from 1989, or that more recent version of 2005, or the manga, or even those very interesting (often characterized as bad) live acton B-movies. But there is another Guyver, a simpler Guyver, a one and done OVA kind of Guyver. It dates from 1986 and it is so rad and tubular (sorry I am going back to my 80s slang days), so ‘out of control’ (it’s in the name of the title after all) and kind of forgotten as well that I wonder if this is a legitimate entry for all that is The Guyver? Of course it is! This may be a dust gathering artifact from the golden age of the genesis of 80s OVAs, but it still counts! This was and is and always shall be The Guyver: Out of Control.

To date, this is the only Guyver that I have seen. I want to change this, not that I was impressed beyond belief with Guyver, but I feel it is worthy to see a more flushed out version of this story. The Guyver: Out of Control is just under an hour and it works very well as a one stop shop for an all out action extravaganza. Similar to Baoh, except our hero was not a test subject run amuck. Sho Fukamachi, our hero, after seeing an explosion from a battle in the distance comes into contact with an odd circular metallic object that he has to pick up and hold. After all being an average high school student, this is different and kind of cool… you got to pick it up… and then you pay the price.

This disc like object ends up turning Sho into one of the most streamlined, and perhaps very dangerous looking, superhero/fighter by having all these coils wrap around him. Ewww… just like tentacles, what the…? This is not weird fetish porn! This is proper action anime here! … At least Sho was not stripped of his clothes. Oh and look, now those guys from the previous battle from afar become the focus of Sho and steal his girlfriend. Bad idea! Now Sho has to fight up against the so called Chronos Corporation and yet another Guyver unit, who started out life as a beautiful redhead and in the process rescue his beloved lady. It’s so cheesy, but you got to love it anyway. 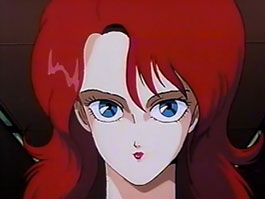 The irony of The Guyver: Out of Control is due to the fact that ‘don’t let the cover determine how you read the book.’ Case in point, the character designs of Toyoo Ashida with their large round eyes (isn’t that what everyone says about anime anyway?) don’t really show just how… violent… this OVA is. But then again, Ashida directed the Fist of the North Star and Vampire Hunter D movies (Hiroshi Watanabe directed this one), so perhaps these designs were a good choice? But seeing the promo materials makes me think initially of Minky Momo or Vifam (both in Ashida’s portfolio) and that this will be kind of a cute production. No Luck Chuck! This is like Fist of the North Star, Vampire Hunter D, or even… M.D. Geist (Eee!) type of violence. Wait a minute… I just mentioned Fist of the North Star and Vampire Hunter D twice (actually three!) … ok, then these character designs are fitting. Maybe? I like them anyway! Next paragraph…

Do you remember a time when anime was promoted as violent, mature and all that jazz? Yeah, those VHS days of the 90s only pigeonholed anime as a singular focused medium, kind of like Seattle music and Grunge. Of course we know much better now as to the variety of what there is in anime. And thank goodness, except The Guyver: Out of Control is actually a decent story, has a plot and some moral sense. It’s not mindless action and violence without a purpose.

… by the way, and this is a quote from the story, Guyver means out of control. … so then this title is simply doubling itself? Maybe it should have been called Guyver-squared?