Imagine living in your own dream world; anything goes! This is your ultimate utopia and if you apply any boundaries, they are of your own choosing. Who would be in this dream world with you? What would you do together? Once upon a time there was a property by the name of Urusei Yatsura that during the 1980s was one of the hottest tickets around. This show (and the manga) put Rumiko Takahashi on the map and brought a young director by the name of Mamoru Oshii into the spotlight. Before Ghost in the Shell, Patlabor and even Angel’s Egg, Oshii would showcase his signature style for the first time in Urusei Yatsura 2: Beautiful Dreamer.

The year was 1984 and going to the cinema was the thing to do for an otaku. I consider 1984, the anime Summer of Love. The Macross crew would release Macross: Do You Remember Love and Hayao Miyazaki wowed audiences with Nausicaa of the Valley of the Wind. Mamoru Oshii, who at the time was the director of all that was Urusei Yatsura, followed the script so to speak… and then a second film with Ataru, Lum and crew allowed Oshii’s individual style that we know so well to blossom for the first time. With both writing and directing duties, Oshii would bring his contribution of Beautiful Dreamer into the class of 1984. Oshii’s dreamworlds began to be a part of our worlds. 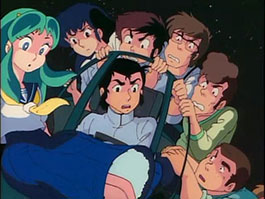 I will be the first to admit that I may not be the best reference for Urusei Yatsura. I have seen the first handful of episodes and have a general idea of the plot and all the hijinks  including the lecherous main character, Ataru, and his jealous love interest/who happens to be an alien Lum. You know Lum (I hope)? The bikini clad girl with the horns on her head… a timeless design. Now, what I am familiar with is Mamoru Oshii’s artistry which he uses tastefully in Beautiful Dreamer. He adds elements of surreal imagery and circumstances and completely bends the rules to what you consider a particular property to be. Think Patlabor 2 in regards to Patlabor as a whole, or perhaps the Ghost in the Shell film in regards to the original manga. He puts his philosophical and symbolic spin into action that only Oshii does so well. Like a skilled painter, his style is his own. And where Patlabor 2 and Ghost in the Shell can get very heavy into drama, being that this is a film is in the Urusei Yatsura universe, we still retain the comedy and dynamism. Mamoru Oshii brilliant with fun and comedy? Oh definitely YES! 🙂

The plot begins with a school festival where everyone is pitching in with their own contributions, decorations and such. Many of the usual cast are putting together a cafe of sorts, which includes a tank in the middle of their particular classroom. Wait, a tank?! How did they get that upstairs? Anyway… events seem as if things are repeating themselves as various characters start to see that the reality of their surroundings keeps moving in a loop. If you travel, you end up back at the same spot and occasionally you lose contact with others. Just what is happening here? Eventually the entire world turns into a ghost town… on the back of a… turtle (it ties in with traditional Japanese mythology)? The only normality is the Moroboshi house, which becomes the safe haven for our cast since there is a constant supply of food, water and electricity for some reason. I’ll say it again, just what is going on here? 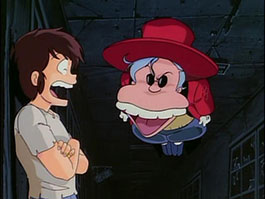 Not being completely up to par with the Urusei Yatsura universe, I will be the first to say that I did not have much trouble following the film. Watching Beautiful Dreamer purely as an Oshii film worked well enough for me! There has been a Blu Ray release recently here in North America, but my viewing of this film came from a recent VHS find.  … Oh whatever has happened to you, oh great Urusei Yatsura? Rumiko Takahashi’s other work, Maison Ikkoku, Ranma and Inuyasha have all eclipsed this once behemoth property. Yet Urusei Yatsura you still live on be it YV series or movie adaptation in our memories… and even perhaps, our dreams…