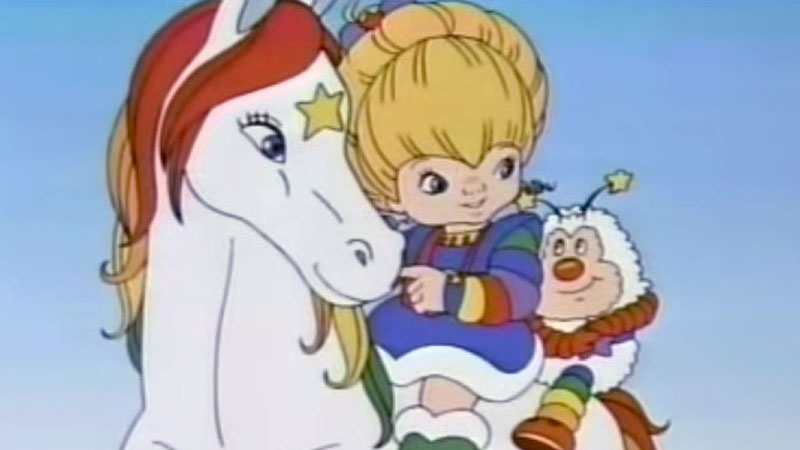 Magical girls are not mutually exclusive to Japan alone. After all the influence of the original magical girl Sally the Witch was based off of the character Samantha Stevens from the popular 1960s TV show Bewitched. But what if the west could create a property that pays homage to Japan’s homage to something that was in the west previously? Or, is it more like the Hallmark Card company gave a toy concept to the production company DiC and they thought, hey we can make her a magical girl? It doesn’t matter how it all happened, the only thing that matters is that it’s time to talk about a legend among legends. Miss Rainbow Brite herself… Hip Hip Hooray!

Before I begin I will be the first to say that Rainbow Brite is not officially an anime, but she belongs here at CAM. First she was created during the 1980s (1983 for the toys and 1984 for the first animated installment). Two, Rainbow Brite, at least according to Wikipedia, was broadcast in Japan as well as the west. Three, the preproduction was all American and French via DiC, but the heavy lifting, being the drawings and animation, was completely Japanese in origin via TMS (Tokyo Movie Shinsa). And not just TMS the company, but one of their best directors (and one of my all time favorites), Osamu Dezaki, worked on the show. Though this show looks nothing like Dezaki’s signature style. And four… number four… I love Rainbow Brite and since I am the boss here, the verdict stands. After all I need some more color and happiness around here. …and more 80s cartoons as well for nostalgia and to prove that my generation had awesome entertainment. 🙂

The premise is very simple… a little girl named Wisp is cast into a world of darkness and  meets up with various friends (the Color Kids and Sprites), a “magnificent horse, the glory of the galaxy” (Starlight’s got some confidence) and the powerful color belt to spread joy, happiness and color all over Rainbowland and our world as well. Together they hold back the naughtiness of the ill-behaved Murky and his second in command Lurky (HEY MURKY!!) by halting their plans of bringing gloom and darkness into the world. Can’t we all just get along here? This is yet another simple story of duality where our hero takes on an antagonist and triumphs in the end. Except we have it all in nice full color; I mean you would expect nothing less from a show titled Rainbow Brite? I think so. That and being a product of the 1980s, a colorful decade in more ways than one, expect nothing less.

So here is a fun exercise, in what ways does western Rainbow Brite differ to other magical girls of Japanese origin? Perhaps the biggest and most obvious, is the fact that Rainbow herself does not transform from a mundane identity. She is all who she is and lives in the wonders of Rainbowland and not in our world as some average middle, or high school girl. Therefore, she does not have the typical magic wand which aids in the transformation process. Rainbow has her fingers, loads of star sprinkles and the previously mentioned color belt as tools for her magic. As a character Rainbow is almost a mediatory between the later (1990s) hero type of magical girl, like Sailor Moon, and the contemporary (1980s) idol good girls of Creamy Mami and Minky Momo. What of these differences in the grand scheme of things? I say they are welcome!

Now here is a question… why only 13 episodes of content? I believe the initial episodes were more geared for direct to video while the later filled out a run for Saturday morning broadcast. Still, Rainbow Brite had possibilites here. Yet why cry over what did not happen and celebrate what did come to fruition instead. After all, Rainbow wants us all to have a great day. Actually, that should be more like… A GREAT DAY!