If one must set out for a voyage to the stars, you must do it with an element of style. An ordinary spaceship will work for many, but come on now… let’s push the boundaries of imagination. What about traveling through space in a train? Hmm?… I like it… all wood grained and classic black iron, now that is classy! As well, a voyage to the stars should be something personal, a journey to not just discover what is out there, but also what is within yourself. Galaxy Express 999 is such a journey that once you ride this train line, you will never be the same. 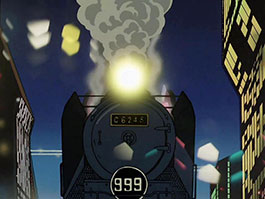 Here is an idea… let’s say you want to honor your goal to achieve immortality by adopting a mechanical body and the only way to do that would be to board a train to the stars that will take you to this fated destination. Only problem is that this train ticket is quiet expensive and sought after. Plus, you also wish to avenge your mother’s wrongful murder since you have so much spare time with all this other stuff going on. Are you in consensus with our hero Tetsuro Hoshino for a ride on the Galaxy Express 999? Great… we have a ticket for you, except you have to have the classiest lady in all of anime join you in your journey.

Leiji Matsumoto’s vision of science fiction is beyond brilliant. What sets him apart is his use of tenderness and emotion. I always shed some kind of a tear due to the enduring qualities and almost simplicity of Galaxy Express 999. That almost motherly womb of nurturing I get from this movie is summed up in that lady I mentioned earlier, Maetel. Her name is derivative of mother, matter, maternal, Mary, or mare (sea/waters) at least that is my hypothesis. Beyond being a near protective saint, she has the longest blond hair I have yet to see and dresses in a Russian styled black fur coat and hat. So classy! If the story tells the meat of the experience, Maetel represents the symbolic image of this story. I hate to see her as a mascot, more like an ascended master in the form of an anime heroine.

The essence, or perhaps theme of Galaxy Express 999, is beyond the awesome space operatic elements. Often we are watching a story set in the future, but the true teachings are of the present moment. Life is something to be cherished and in two ways particularly. One, the fact that we are mortal and the time that we have is precious and our presence in this very moment is precious. And two, love yourself for who you are and what you believe in; your highest dreams and aspiration. Love yourself, love the environment and welcome all opportunities, you never know who you may meet on your journey when you just go with the flow. Just ask our hero Tetsuro.

Galaxy Express 999’s movie adaptation is more than just a basic re-telling of the epic TV series. True we follow Tetsuro Hoshino’s path of maturity, which is sped up and abbreviated due the compression of the mammoth length of the manga/TV series original, yet we also have the inclusion of Matsumoto’s other great sci-fi epic which ran concurrent with Galaxy Express 999. That being of course Space Pirate Captain Harlock. This movie could be the ultimate expression of the constant retelling and reimagining of all that is the Leijiverse. And not just Captain Harlock the character, crew and mythology, but also that TV series’ director, Rintaro. Always a visual feast, so typical of Rintaro, this may be his most coherent film where the story does not get lost within the presentation of powerful imagery.

Stories of the hero’s journey number in the infinite and often times we are telling the same over yet again with a slightly different veneer. The origins of Galaxy Express 999 may borrow elements of Night on the Galactic Railroad and Star Wars (or perhaps Yamato?), but in the end it is something far different. A classic among classics, a step above the rest, Galaxy Express 999 may be one of the best coming of age stories ever created. Thank you Leiji Matsumoto and Rintaro for this great gift.