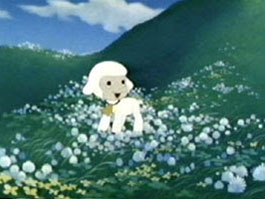 Ahh! Look at the cute little lamb, I bet this is a movie that will be all heart warming and cozy and adorable. Oh hey… and this was produced by Sanrio of Hello Kitty fame too, yup heart warming, fuzzy and kawaii. And then reality sets in once you start to watch Ringing Bell. What you see before you is a cautionary children’s story with a moral to teach.  And I say children’s story in the highest regard by recalling a quote by C.S. Lewis, “A children’s story that can only be enjoyed by children is not a good children’s story in the slightest.” So a dark tale wrapped in an unassuming adorable package; a venerable wolf in sheep’s clothing… funny how thats a fitting statement for this classic short film. Details to follow… 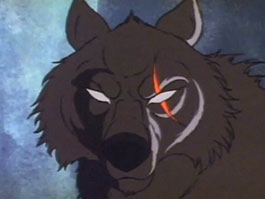 Let’s start with a personal question… how much does your anger control you? Are you so consumed with negative emotions that you become blind to your own ego? Mix one part Disney’s Bambi and one part the transformation of Anakin Skywalker into Darth Vadar from Star Wars and you get the basic foundation of Ringing Bell. We have a story about the downfall of the innocent protagonist, who dives into the dark night of the soul and keeps on falling into the ever expanding hole of suffering. This dark night becomes the ever present defacto reality our hero lives in, until the very end when our hero learns of his misjudgments. We all suffer to a degree, but we should NEVER suffer alone, or make life altering decision in that state of being.

Our hero is a young lamb, Chirin, adorable as can be, living an idealized childhood. He laughs, he plays, he loves to eat his green clover and he is the apple of his protective mother’s eye. Life is simple, happy and almost utopian. Around young Chiron’s neck is a bell that acts as a signal, a warning, to prevent Chirin from exploring too far from safety. The line of safety in our story is a simple wooden fence. Yet as much as you can close yourself out from dangers or change, those forces will find a way to creep in. Such is life, a constant battle between light and dark that is always in a constant state of change. Chirin is told not to cross the fence since there are dangers on the other side, but what if something from the other side crosses this line of safety? One night a ‘something’ does cross that line, a wolf specifically, and changes the course of Chirin’s life forever.

The consequences of this aforementioned tragedy leads our character onto a unique journey. The old saying of if you can’t beat them join them pertains. Instead of confiding his feelings, his suffering, with his peers, Chirin instead tries to enact revenge to the wolf the best way he can. And when he realizes that he can’t beat the wolf, Chirin instead desires to become a wolf; to go against his natural tendencies. Why be a weak and timid lamb when you can be a strong wolf? Like so many of us when we are young, we eventually realize that making a decision from an ungrounded and negative stream of consciousness only feeds into the initial pain and injury. The process eventually leads us to look at ourselves in a metaphorical mirror to have only one question enter into our minds. What have I done?

Sanrio’s output of original work outside of the Hello Kitty brand are a treasure trove. Ringing Bell is one of many examples, including Sea Prince and the Fire Child and Unico. A gem for all ages and all time and a reason to show that the childhood experience goes much deeper and shapes us beyond the ephemeral moment.