Say shojo and often words like romance and magical girls become the defacto answer. Of course this is only stereotyping and not the complete truth. As an example, CLAMP creates shojo material and it is anything but light fun and flowers. More like some of the best dark and psychological material ever made. But, what if a shojo title was more like say Fist of the North Star in it’s level of action and even at times… gore. Hang on a minute… got to thumb through these old LaserDiscs here… AH HA found it! Let’s rap about a little OVA from 1989 called Blue Sonnet.

For an OVA that is five episodes in length, Blue Sonnet hits you fast and hard from the beginning with intense fervor as we dive into the opening credits. That theme song, “What is love?”… such a favorite of mine. Interspersed between the rockin’ guitars and gritty vocals we see the back story of our anti-hero Sonnet Barge. She is a teenage esper who seems to have come from the rough streets of New York and awakens her latent powers during uncomfortable circumstances, which brings more confusion into her life. After the credits we fast forward to find Sonnet showing her skills in a training example, against tanks no less (damn girl!), which highlights the cyborg enhancements she has received from a group known as Talon. She also has this weird tiara like headpiece that becomes a funky visor… stylish! From here she becomes focused on her new mission, to find Red Fang… and go to a Japanese high school as well. 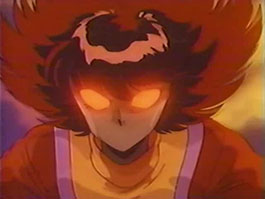 Now onto our other main character and perhaps the true hero of this anime… wait… Blue Sonnet is not all about Sonnet? The original manga title was Red Fang Blue Sonnet, so either the producers or the English translation dropped out Red Fang. In a way this works out because Lan Komatsuzaki doesn’t have a clue she is Red Fang, a super esper from an ancient lineage. She is just an average high school student… yeah we have all heard that one before. Come on Lan, you can move objects and mentally sense things at a higher level than most of us. All kidding aside, her eventual meeting with Sonnet becomes fated, confusing and dangerous. Lan’s questioning of why the new girl in class has it out to get her mixed with emerging powers will turn her life upside down. Plus, she is beginning her menstrual cycle as well. When it rains, it pours.

Over the course of these five half hours, more characters become involved (including two more super powered espers!), the story gets darker and the action explodes. Almost like a video game with five levels, will you be ready for the final boss at level five? Just watch out for that tank thats called a Tarantula. Or, perhaps on another view, like an organism Blue Sonnet just keeps multiplying out of the shear reason of existence. The plot is fairly run of the mill 80s sci-fi and action, but it does it so well that it doesn’t matter. Much like punk rock, this OVA is a more simplified approach in art style and attitude, but loud and big in presence.

Let’s return to our girl Sonnet. She is after all a tool for the Talon organization and eventually she comes to question what is right and just for herself. She questions what is her true enemy and is it right that she should commit these violent acts in the name of a group that brought her out from her troubled past. Will she ever learn, as the opening credits say, What is love? And maybe more appropriate, what is my own truth for me? By the end we get a little glimpse of a vulnerability from Sonnet, but because this is a short OVA, its glanced over very quickly. Could we get an episode six to finish this off instead of all of this being up in the air? I mean there are romantic tendencies here, but I leave that to you to view as to with whom.

So on a final note… Blue Sonnet you kick ass oh so well. Now I need to re-listen/watch those opening credits yet again just because 🙂