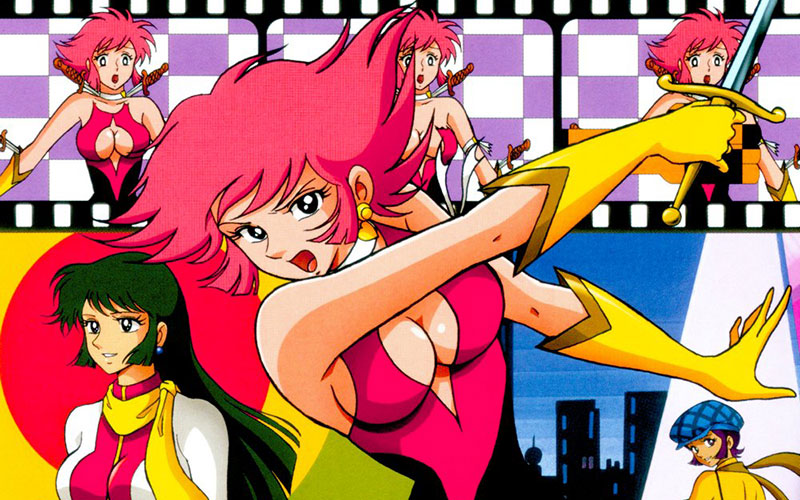 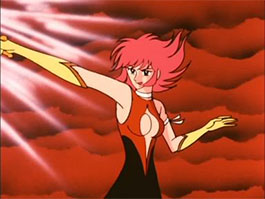 What we need is a hero… right here and right NOW! Not just any hero, but a warrior of love. Ai no Senshi! And we need a lady to do this job, because guys I am sorry, you and I have had enough of being the champion. It is time for the ladies to shine, transform and kick butt. And, NO!… Sailor Moon you need to sit down my dear because you have to meet your awesome auntie who did it all first. Sometimes she is a news reporter, sometimes a fashion model, or sometimes a motorcycle racer, but to me, she is just awesome. She is after all, the one, the only… Cutie Honey. Or perhaps it’s Honey Kisaragi? Cue that famous tagline… Honey Flash! 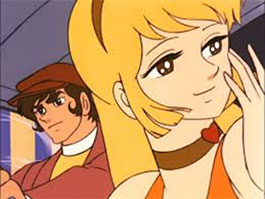 Now I will be the first to admit that I love 60s camp. Even though Cutie Honey was a product of 1973, it retains all the over the top theatrics of say Barbarella, Modesty Blaise and maybe I am stretching it Valley of the Dolls (Neely O’ Hara!… OK, I am stretching a little). But the bright colors, the over the top acting, the parody (either intended or not) and all that big hair and fashion is simply fun. Now add all that into a magical girl show, but instead of an ordinary human lady, let’s make our pretty girl an android. And this story also needs a shonen fighter sensibility as well just because. That should be all the ingredients we need, now lets make this show rock!

Go Nagai, you sir have a twisted mind, and yet brilliant as well. From the guy who sprang forth titles ranging from Mazinger Z, Getter Robo, Devilman and even the lewd Violence Jack would come Cutie Honey. And it shows, in particular with the bad ladies of the criminal organization Honey fights each episode, the nefarious Panther Claw. These villainesses of the week come in all shapes, sizes and with the wildest choices of costuming to boot. I have never seen the female form look as beautiful and/or grotesque at the same time. And then you have the leaders of Panther Claw, Panther Zora and Sister Jill. Sister Jill, with her dominatrix costume and well endowed figure, I am sure made many young boys lust over the bad girl instead of our heroic Honey. But then again, Honey has a fan club a mile long… 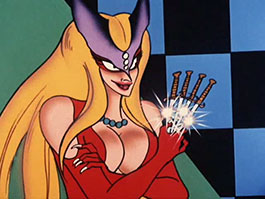 Such as those Hayami boys. Honey’s boyfriend Seiji, his father Danbei and his younger brother Junpei all show their devotion and attraction to ‘Miss It Girl’ Honey usually by comedic means. More than just comic relief, when Honey is in a jam, or needs a second hand, she can rely on the skills of the Hayami clan. And then there is Miss Alphonse… could be a lesbian, could just be enamored by Honey’s beauty, or could it just be that mustache? Honey has yet another reason to skip class besides being a little rebellious. Oh how it is to be so popular. Of course her looks are not what makes her attractive to Panther Claw. That necklace she wears around her neck is their prey. With it she can transform to all her alter egos, besides that it is one hell of a McGuffin device.

And now for something completely different… let’s talk music. In particular the themes, both the opener and the closer. These are perfect gems that have been resurrected in every reincarnation of our hero Honey. But the original versions… timeless. The opening is funky, funny and catchy beyond belief with the punchy bass, fuzzy guitar and string and horn sections scream the pop music of the day. I say, it’s time to dance and shake it. Now the closer on the other hand is a soft ballad that could have been a product of say Burt Bacharach production and arrangement. It still stands for me as one of the best songs I have ever heard in anime. It’s kind of romantic, like a great dance song.

A staple of 1970s Japanese animation, a classic soundtrack and an iconic hero. A triple powerhouse combination on why Cutie Honey lives on in it’s original and more current adaptations (including an awesomely bad live action version). When evil calls we will always have Honey Kisaragi to save the day. “I’m changing now”… wink!