I like a story that represent the cycles of how we live our lives. After all, business marketing and historians may disagree on this stating everything is always up and up. Life and nature, my friends move in a circle. We reach peaks of success that must in turn draw itself back into the darkness and end up going into the so-called ‘Hero’s Journey’. The changing of the seasons and even your life as an individual all go through this process every day and year like clock work. It is never linear in fashion and neither is a great story. And I know such a story from 1985, Nippon Animation’s Little Princess Sara.

I have become a fan of the World Masterpiece Theatre series over these last couple of years. These are stories familiar to many of us in the west, which instead of the heavy lines of a printed text we get an animated version in full color… “come with me, and you’ll be, in a world of pure imagination”… I couldn’t help but include that line (Willy Wonka forever!). And we must all begin somewhere and for me, World Masterpiece Theatre would begin with the 1985 entry, Little Princess Sara. Having never read Frances Hodgson Burnett’s original writing and only knowing a sparse amount of detail, I was essentially going into this one blind. And in many ways, that is an advantage. Well, at least in my mind it is. No expectations are the best expectations. 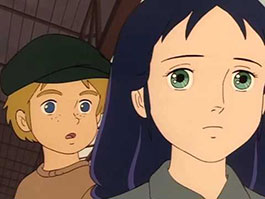 Sara Crewe is a very fortunate young lady. She has a supportive family even though her mother had passed on some time ago. Her father, who is quite the successful businessman, is loving and a source of stability for young Sara. She has almost everything she could ever ask for and in turn is not spoiled and honors what she has. Being as she is to become a proper lady of her generation (we are talking late 1800s Europe here), she is sent to be educated at a prep school in England, while her father will return to their home to continue his business in the British colony in India. She is soon brought to the attention of Miss Minchin, the headmistress of the seminary she will be attending.

Settling in with her treasured doll and an assortment of new friends, classmates Ermengarde and Lottie, and allies such as Peter the stable boy and Becky the maid, Sara begins to enjoy her time at the seminary. Until… fate had to reigns it’s hand to announce that Sara’s father had passed away without any known inheritance. Sara’s identity switches from student to servant in order to stay at the seminary. And this brings a smile to those who didn’t like her in the first place. Such an example is Lavinia, who in the tradition of Mean Girls, could be the spitting image of Regina George. She is such a snot-nose and of course has a couple cronies that agree with every little conniving idea she musters up in that twisted brain. But what of who is in charge, Miss Minchin? Does she give any grace to our downtrodden Sara? Hardly, after all ‘Minch’ rhymes with bitch so you can see where this is leading towards.

Can Sara once again rise? Return to a state of glory and humanity? The answer is yes, but the heartache she endures makes this one tragic tale with a very happy ending. Passing through the dark night of the soul is always a painful period for anyone, but handling it with grace and dignity will always lead to a finality of compassion. Much like a typical soap opera, the emotions and circumstances are heightened for dramatic purpose, but they show the difficulty she must endure to in turn, wait for the proper season to rise again. Have some tissues ready at certain moments. I may have gone through a box, or am I just exaggerating for dramatic purpose? I leave that up to your opinion of the story.

Thank you Little Princess Sara. You gave me my initial sojourn into the World Masterpiece Theatre and for that I am grateful. I have seen a handful of the collection and I have many more to open up to. And since most of these are subtitled, that count’s as reading material, right? Even though the printed copy is no where near the front of my face? Maybe? Nothing wrong with text, but I do like all the animated pictures! 🙂