When it comes to Space Battleship Yamato, I give the utmost respect. The original super otaku craze has all the justification it truly deserves and it’s not because it has a reputation, or a status of being one of the greatest series in all of anime history. It deserves my total respect, and hopefully yours as well for a singular reason. Science fiction can at times be too impersonal, or at the other extreme, too fun. And yet, Yamato is neither. It’s the beauty of the potential of humanity in the purest sense of the word.

By the time I got around years ago to sit and watch the original series from 1974, I knew I was in for something great. I was well aware of Yamato’s pedigree and I considered this to be one of the keystones in the select elite of classic anime that all fans should see. Yamato was required reading so to speak and any other substitute just would not suffice. Initially the concept belonging to producer Yoshinobu Nishizaki, with refinements brought in by a little manga artist by the name of Leiji Matsumoto turned this show from resurrecting the pride of WWII Japan’s naval fleet that flew through space into one of the greatest anti-war epics of all time. But, then again Matsumoto was no slouch when creating epic space dramas with feeling. Any fans of Captain Harlock, or Galaxy Express 999? Yeah I see you 🙂

Matsumoto’s touch gave Yamato a humane touch and it is expressed in our two main heros, the young Susumu Kodai and the elder captain, Juzo Okita, the greatest father figure of all. Every time and anytime I witness Captain Okita’s death scene I always shed a tear; you were a good man sir. These two men along with the other members of Yamato including Yuki Mori (token female character), Daisuke Shima (Kodai’s friend) and the remaining crew fly toward the planet Iscandar (awesome name, I think it’s Sanskrit) to meet a woman named Starsha to receive the great Cosmo DNA. This gift is said to help clean the ravaged Earth from all the toil and radiation that has built up from the invasion from the Gamilan Empire. Gamila’s emporer Deslar will stop at nothing to prevent the Earthlings from getting this and in a span of 26 episodes we watch this drama unfold. 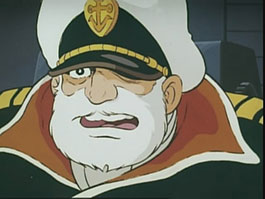 There are many scenes from anime that have left an indefinite mark on me, but none can hold a candle to the scene after the crew of the Yamato defeated the Gamilan Empire on their home world. Was this a time to celebrate, to shout for victory, to show them who was boss… NO!!!  Absolutely not, because in the scene both Yuki and Susumu saw what that victory brought. Ravaged destruction, death and shock all from what should be seen as victory. How does someone face themselves to the consequences that they have enacted onto another living civilization? After all in the end Gamilas was a dying planet and despite the wrongful actions of it’s people, all that was wanted was to acquire a new home world. As Susumu said that since ‘we’ were young ‘we’ have been taught to win at all costs, but this victory… is quote… ‘bullshit’. In anime as in real life, we have had enough of military conquests. Better to extend a hand in friendship than raise a gun in superiority. 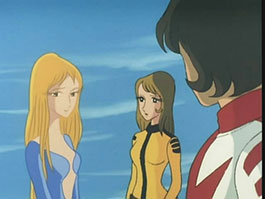 This series, very similar to the original Mobile Suit Gundam, was not popular in the eyes of the masses during their original TV runs; a second chance would be around the corner. A theatrical release would resurrect both of these series and turn them into the superstars they are today. And while the film compilations are convenient, they don’t give the whole picture in my eyes. If you can’t watch all 26 episodes of Yamato, then yes see the movie. But… but, if you can witness the whole series there are little stories that make the difference, similar if this was a novel. Or, for bonus points, watch both 🙂 Or, if you are older than me, you would promote the old adaptation of Star Blazers as well. Even though I prefer the original Japanese, this dub, for it’s time, was special.

Space Battleship Yamato has influenced me, has shaped me, helped me ask questions, helped me cry when I needed a cry, helped me smile with I needed a smile. It’s a beautiful thing, as Captain Okita said in his death scene right before returning to Earth… “Earth, everything about you is beautiful.” How has the beauty of Yamato left it’s influence on you?