Man (or woman) and a machine working together is a beautiful thing. Not a computer, or an iPhone, but a machine that allows a human being to move at speeds beyond the capability of one’s legs. Moving at high speeds in a vehicle on a race track animated by the animation studios I love most… WE HAVE A WINNER! From a lover of finely crafted machines I present, Baribari Densetsu, translated as the Legend of Rolling Wheels, or Motorcycle Legend. And, this is way more than a story for just speed geeks. I promise. 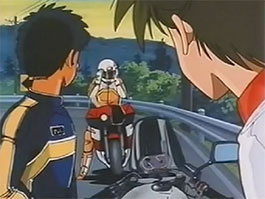 Our hero, Gun Koma, loves riding on his motorcycle, especially going downhill and trying to beat this rival of his who seems to have more skill than himself. Of course they both do this on public roads which makes it totally illegal and dangerous. Now what does this remind me of… Initial D maybe? …Well, well… turns out the original manga was done by the same guy, Shuichi Shigeno. How about that? Needless to say there is a heavy rivalry between Gun and the skilled Hideyoshi Hijiri (probably because he is shorter and smaller?), but there is another rider who one day showed the both of them up; their high school classmate; miss cute tomboy herself… Miyuki Ichinose, or just Mi. 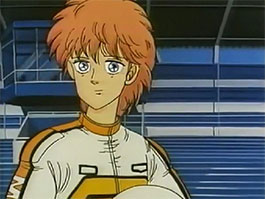 Yup, you two boys were schooled by a girl, TAKE THAT! There is good reason for this as she is the daughter of Ichinose Racing Team’s president, so racing would only come naturally presumably. Thankfully she is a generous one as she sees talent in both boys and asks if they would be interested in entering a four hour race at Suzuka racing circuit, but… Gun and Hideyoshi will have to run as a two-man team and get along. And while this race will become the big focus of the story, we have to remember that all our characters are still high school students. And as high school students the usual riffraff of trouble making bullies and romantic infatuations make appearances. Even hot headed and tough Gun has a girl crushing on him really, really bad.

When we do get to the big race at the awesome Suzuka circuit we see how Gun and Hideyoshi grow from arch rivals into almost blood brothers. It is idealistic that they do it at one of the world’s best circuits. Seriously, watch any F1 race that was staged there or find a driving game with it included. Suzuka is demanding and fun. As for the racing animation I want to get back to Initial D for a second. One thing that Baribari does that Initial D did not, which maybe because it was the times or whatever, was show all the action as hand drawn instead of the PS2 looking CGI action. The movement is organic and smooth and all the bikes look like they are a part of the actual production instead of oddly placed.

And yet, after this big endurance race, we still have even more story to tell as Baribari Densetsu ends with a tragedy that borderlines on the unfair. Just as so much promise for the future was within sight, it all changes in the blink of an eye. Do I know any anime that features a motorcycle that does not end a little bit on the tragic side? Megazone 23, Venus Wars and Bobby’s Girl come to mind, but it goes to show that one must always be careful when taking responsibility of a two wheeled machine.

Baribari Densetsu, for me, is a gift from the heavens. From early childhood I have always enjoyed motor racing. Not for the adrenaline thrill, but for the elegant dance of man (or woman) and a machine on a track. It takes great skill to guide either car or motorcycle at racing speeds and for that I have great respect for those who do it well. Even though I don’t follow the professional circuits anymore, I still yearn for that love only this time within another love of mine, that being anime. Classic anime’s default answer of course is Speed Racer. Then there is the rallying OVA Goddamn (which is ok) and the F1 series I would die to see, F. Is there anything else besides going to Future GPX Cyber Formula (just not interested). Then fate landed this motorcycle racing short into my lap. Thank you.

If only I had a TurboGrapx-16/PC-Engine as they had a Baribari Densetsu game. Oh well, there is always my trusted SEGA Genesis and Super Hang-On 🙂