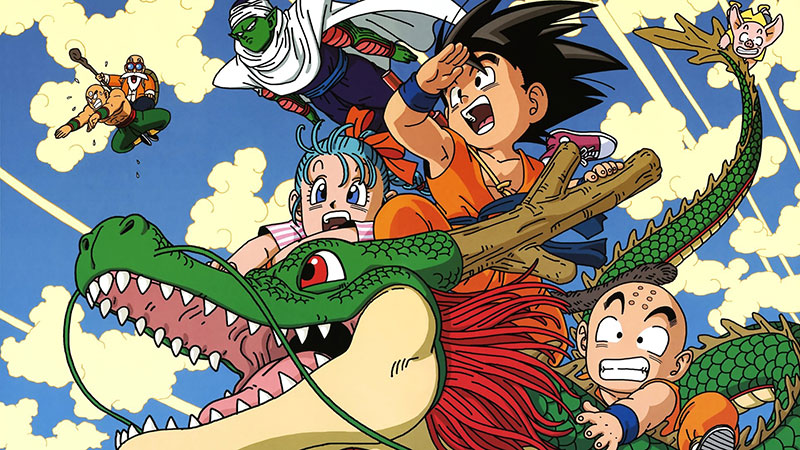 Besides Pokemon and Studio Ghibli, Dragon Ball could be considered the ‘franchise’ in anime that equates a license to print money. Even me mentioning it here made Dragon Ball another $25… just because. Dragon Ball Z in particular cannot die if it tried and there were moments that Akira Toriyama tried to make it happen and FAILED! But I never got into all the testosterone over the top fighting of that series, which made me look at the original Dragon Ball for years as a passover. But, in due time I thought to myself, give that original a chance. Many folks say it is a gem of comedic action. So I purchased those blue Funimation boxes… and I must say I really… liked it. Who would have thought it.

Seriously as repetitive and repetitive and repetitive it was, it was a good show. Did I mention it was repetitive because I will mention it again so watch out! Hot off the success of Dr. Slump and Arale-chan, Akira Toriyama thought he should make a rendition of the traditional tale of The Journey to the West mixed with his humor and splashes of 80s sci-fi. And it paid off… BIG TIME! Although to me the show goes something like this… our heroes go and look for the dragon balls, they collect them and make a wish and then we have a martial arts tournament and then we look for dragon balls again, collect them all and make a wish and then have another martial arts tournament. Over and over again with the final tournament taking place a few years later. Repetitive indeed, but entertaining even more so.

A classmate of the 1986 season that along with it’s Shonen Jump brother Saint Seiya would bring about the revolution of what shonen, or more precisely fighting, anime would become. Heavy sci-fi and mecha began to wane and the super hero in the making journey of a hero who would have a number of adversaries became the new standard. The fighting genre though not born in 1986 became the defacto standard and it is because of Dragon Ball that the damn broke open wide to flood us with a multitude of popular series. Rurouni Kenshin, Naruto, One Piece, etc. all owe a debt to Dragon Ball. But, don’t forget ‘uncle’ Fist of the North Star as well and brother Saint Seiya (because I love Saint Seiya so I have to mention it again). But in terms of influence and staying power, Dragon Ball takes the cake. 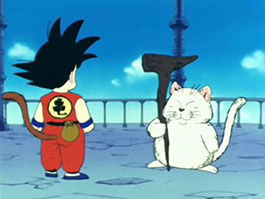 And what of our hero? Little Son Goku, the ever innocent feral child who is well… kind of adorable. I mean this kid is like the goofy clueless little brother I wish I had. And it is from Goku’s naivety that we get some of the best humor. The first arc of the series, which introduces a majority of the main cast family is a much watch. If you can’t commit to the whole series, give the first 13 episodes a go if you have yet to see Dragon Ball. If this would have been the series in and of itself it would be perfect. Kind of like an OVA, but as this was a TV series and a popular one at that it would keep going and going and again we get back to that old word… repetition. Make the formula and tweak it ever so slightly each time you have to repeat and you get a journey that could possibly never end.

And eventually this original series did end, albeit  a few years later with the cast all grown up. Oh the end of childhood. After all we had to make way for the further adventures of Dragon Ball Z. So then I look back and think what were my favorite moments? Many abound such as Goku climbing to the sky to train with Korin, watching Emporer Pilaf bumble up again and again a lot like G.I. Joe’s Cobra Commander, the world’s most comfortable pair of underwear, watching Tien Shinhan turn from hard corp baddie into one of the most honorable characters, or Goku wondering why Bulma does not have a tail or ‘balls’. But then there was that visit to the Penguin Village where Arale-Chan lives. I may not want to dive into Dragon Ball Z, but Dr. Slump (which I mentioned earlier) is extremely tempting.

I must say, yes, I am a convert. Even that theme song is so catchy. And like in any proper fighting anime I have to get back to training, which for me is watching more stuff, or pulling what I can from memory. So the big question I have for all you… if you had all seven dragon balls, what would you wish for?