Let’s see. What should I watch that is different? Hmm… Gauche the Cellist. What’s this? Let me see who directed this… OH! This is one of Isao Takahata’s pre-Ghibli works. And it’s based off a short story from Kenji Miyazawa, author of the original novel that became Night on the Galactic Railroad. Well, that settles that, I’m sold. Time to hit play and check this out. But first, I need some popcorn. 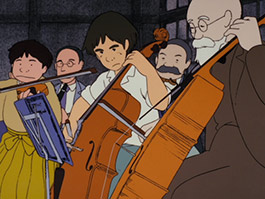 You know what I love about you Isao Takahata? You are like George Harrison. Miyazaki is like Lennon/McCartney and getting a majority of the spotlight both within your group and friendship. His work is often more recognized and is often looked at as the frontman. But Takahata, when you speak up or make a film, it is a little different and you own the moment, much like Harrison. You don’t shy away from fame, you just do it your own way and with the quiet grace of a seasoned professional. 1982’s Gauche the Cellist would be the final production Takahata would produce before the founding of Studio Ghibli, along with the 1981 movie Chie the Brat.

Our story concerns a small provincial orchestra caught in the act of practice. The music is Beethoven’s 6th Symphony, the Pastoral Symphony. The group’s unity and sound is going well, except for one element. Gauche (Goshu is a more appropriate translation) on the cello is a little behind in his timing and more importantly behind in the feeling and passion of playing in the moment. The conductor spots this and makes a melodramatic statement. Needless to say, Gauche is a bit taken back, but he knows something is missing.

Returning to his modest country home he pushes hard to get the best out of his playing. It is not working, until he encounters some strangers in the night. Almost like Charles Dicken’s A Christmas Carol, our hero has to face himself through lessons taught by complete strangers. But, unlike A Christmas Carol, we don’t get ghosts of particular moments of time, we get an assortment of animal friends from nature. The first being a calico cat, the second a bird, third a tanuki and finally a field mouse and her child. Each lesson brings out the essence and passion that is necessary to be a great musician, though in the most bizarre and unexpected ways. Much like listening to the forces around us, or more importantly within us, we often dig up the solutions that answer the questions, or issues we often struggle to deal with in almost a moments notice when we concentrate on our problem from an alternate angle. 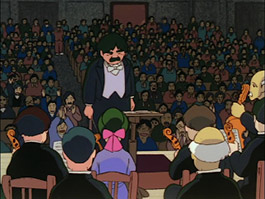 Only an hour long, I wish Takahata would have stuck with this shorter format when he released Tale of Princess Kaguya. He keeps it simple and sweet and does not over embellish for the sake of self indulgence, something I feel he and Miyazaki have done a bit of in more recent works of theirs. Although the artwork is embellished in certain areas and that deserves extra points. Leave it to Takahata to be experimental at just the right times. Oh, by the way the company that worked on this was called Oh! Production. Had to play up the double Oh… kind of like James Bond, 007… OK I have gone on a tangent.

Gauche the Cellist, you sit in the back of the room without making much noise, or fuss, but your pedigree is unquestionable. Truly a hidden gem by one of the best directors in anime. And it has Beethoven too… fancy 🙂 But sadly, no George Harrison songs 😦