How often do we get to have a second chance? Have you ever had an idea, a story or a project that was meant for a bigger promise and an even bigger finale? Often times some stories, be it anime or otherwise, get a premature conclusion. This would be the second production in a row where Yoshiyuki Tomino would go back and retell his story again after early cancellation. The first was that little show he did a season previously called Mobile Suit Gundam, though that was more a refinement of the overall story. For Space Runaway Ideon, the ending was completely cut and rushed leaving a universe of questioning what just happened? Two years later the missing pieces and a proper ending would emerge in the theaters as The Ideon: A Contact and The Ideon: Be Invoked. 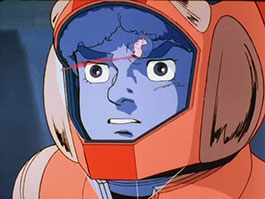 For my money Ideon is the ultimate super robot tale, maybe even the most amazing space opera I have experienced as well. Tackling issues of xenophobia and higher cosmic metaphysics around a large cast of characters that go through beyond the sublime. The Ideon robot, for me, is the most terrifying machine… EVER! The Ideon is not so much a robot and the Ide energy is more than spiritual mumbo jumbo. These are acts of nature, an act of whatever name you want to call the deity, or the ultimate power of the universe. Perhaps the embodiment of the universe itself as neither good nor bad, it just is. Perhaps the energies to keep the cycles of life and evolution flowing, continuing and growing. All of this from the origins of a simple toy sponsored show with funky disco derived fashions. Truly a concept beyond it’s physical package.

First let’s look at A Contact. There is nothing new here if you are already familiar with the TV series. Retelling the first two thirds of the series in a condensed structure makes the movie move quite fast, but I would still recommend viewing it as there is nothing wrong with reviewing the events leading up to Be Invoked. Though for those of you who have yet to see the Ideon TV series I would highly recommend diving into the 39 episodes that were produced as you get a little more background. There is nothing wrong with cutting out the fat so they say, but when you cut into the meat as well it can leave you a little hungry.

Now for Be Invoked. I really, really, really and truly love this movie and what it did for me. After watching the TV series, then A Contact I would move to Be Invoked and felt a sense of satisfaction that this journey was worth the work. The masterpiece was at the end, much like the final movement of a great symphony. The same thing happened to me with Patlabor. The original OVA, to the first movie and then Patlabor 2: The Movie as a finale was like being bathed in something words can never describe. I have seen the promised land and but it truly moved me. It’s moments like this that make me most happy. Many have said that the Ideon movies are much like the Evangelion movie duo, Death and Rebirth and End of… , but I disagree. True, Gainax was yet again paying tribute by following a formula, but the Eva movies presented an alternate ending kind of like ‘top this if you didn’t like how the TV series ended’ because we gave you the end and you thought it was not enough. But where both franchises are similar in their movie adaptation is the fact that they end BIG!

But what about Be Invoked makes it so worthwhile personally. Ideon for me is one of if not the darkest sci-fi space opera I have witnessed. Yoshiyuki Tomino would let it all out with the plot revolving around two civilizations who can only fight each other. When characters die, they die and tragically, not unlike Zeta Gundam and Aura Battler Dunbine. And in Ideon everyone pays the final price, kind of like and old saying I heard as how serious is life, you won’t get out of it alive. If this spoils things I am sorry, but Ideon is known as the show where everyone and everything dies. But, from the movie I have gained a new perspective on the concept of death. The floating spirits being reborn to a higher consciousness is a welcome concept. It is not over when the physical organism is done, you continue on although not in the same state of mind or body. That and the wisdom of Alan Watts stating that death is like going to sleep without waking up, or being born is awakening without a memory of falling asleep. So instead of death it is rebirth and as I have often said in the end, we will all die and live happily ever after.

It’s big, it’s bold, it’s one of Sunrise’s best robot franchises ever. Would I ever want to see a remake? Well much like Citizen Kane, how do you top perfection done right the first time? Particularly with that great orchestral score (I love those soundtracks). Oh Ideon, how you rocked my world.