Ah the Dirty Pair… I mean Lovely Angels (watching to see if Kei is going to smack me), the quintessential dynamic duo of anime. You know them (at least I hope you do?), you love them and so do I. Of course we have had many renditions of these two trouble consultants for the WWWA including novels, television, OVAs, movies and that Flash series that I have no interest to dive into (maybe someday). But I want to look at a one-off oddball that just happens to be my favorite outing of Kei and Yuri. So grab Mughi and get the engines started as we head to the planet Ookbar so we can solve the… Affair of Nolandia.

Dirty Pair: Affair of Nolandia was my first trip with the Dirty Pair. Remember good old VHS? After finding a used copy of the Streamline release (more on this later) for a couple of bucks I gave it a shot and the rest is history for me. So what about this entry makes it perhaps my favorite outing, besides it was the first time with the ladies of WWWA? 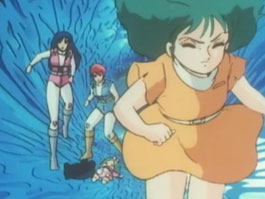 The look of this show is very different, not so much the settings, but the character designs. Gone are the more doe-eyed, cartoony look so familiar with these girls and what we get instead is a more streamlined  design reminding me a little bit of Zeta Gundam, a contemporary of this OVA. The tone is also a little different. Sure there are funny moments, but there are times when this show gets a little serious, particularly with the scenes dealing with psychic phenomena. And as for psychic or ESP ability, did you know that comes from the original novels? Very true and it is the only time this is ever seen in animated form. If you are familiar with the novels, you would know that Kei and Yuri became a team because both have clairvoyant talents. And if you didn’t know, READ, it does a body and mind good.

So what is it that brings our Lovely Angels out to Ookbar and eventually, the forest of Nolandia? Well let’s just say a scientist was looking to escape into exile and oddly the spacecraft he was traveling on ends up crashing. The pilots freaked out, stating that they saw the runway going all crazy. It so happens that this was in the same area our girls were sent to look for a missing psychic girl, Misuni, who is known to have powerful abilities. Can there possibly be a connection? Maybe. Of course along the way they have to deal with a large corporation, the local police force and a tough as nails tough guy, who happens to be a… now that would be cheating.

Now back to Streamline pictures as I will now add in ADV as well. This is part of a handful of properties that have had an opportunity to be dubbed more than once. Of course the original Japanese track is great and ADV’s well… just gets the job done. The Streamline dub featuring Lara Cody (Kei) and Wendee Lee (Yuri) may be a little lighter in the translation, but this one works oh so well that I consider it canon, in my book. Both ladies brought a life to the girls that can rival the original voice actors. If you care to debate this by all means, but I am sticking to my guns. The Dirty Pair dubs may just be Streamline’s best work, with My Neighbor Totoro as well.

From what I could find from research, Affair of Nolandia was probably going to be an alternate OVA series that ended up only being a single outing. It would have been interesting to see where this different direction of the Dirty Pair would have gone, but that is now history. Thankfully we have this one and it is available on DVD and with both dubs no less.